Business, Ethics, and Us 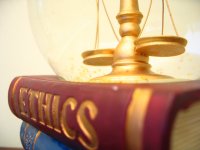 I just came back from a conference on business ethics. The panel was quite distinguished and spoke very well of the need for more ethical conduct in business. The conference was organized by AmCham Serbia, presided over by the rapier tongue of Yugoslav Cosic, and included panelists from abroad, from the business community, and from the government. Many good points were made. Many heads in the audience nodded. But, sadly, we do not have these conferences because we are highly ethical beings and market participants.

We have them because we are, generally speaking, stinking liars and crooks.

A great many laws and regulations have been imposed in Serbia regarding anti-corruption, ethical business, and other such oxymora. Infractions of these laws, we are told, will lead to very high penalties and possible incarcerations. The message is that we should be very afraid of misbehaving. Or that we must now be very CLEVER about misbehaving. The government has put on a very grave face about this issue and seems to show us that they are very concerned about the issue of business ethics.

But in the meantime, we are still, generally speaking, stinking liars and crooks.

It was suggested in the panel discussion that people naturally would prefer to do business with ethical partners, with companies who comply with the law, with businesses who do not place profit above ethics, with people who are honest. To a certain extent, this is very true. If we have a deal to do, we would like to know that the other guy is not signing with one hand while preparing to knife us in the back with the other. Granted.

And yet we are still, generally speaking, stinking liars and crooks.

The thing that bothers me about all this talk is not that people feel some false sense of ethical or moral superiority by talking about it, but rather that it is the simple fact that it just does not seem to be the will of the society to enforce it. It is a matter or societal expectations. We expect to be cheated; we expect people to lie to us; we expect backdoor deals to be done; we expect political interference in business; we expect the rich to get richer and the poor to get screwed.

And we cannot WAIT for the chance to do it ourselves. Stinking liars and crooks.

If this sounds just the slightest but cynical, let me phrase it a little differently. As a society, we generally believe that it is a Bad Thing to murder another person. Ask anyone on the street and they will be morally outraged at the suggestion that murder could be seen as ok. And since we all agree about it, we are happy to know that the government has a law telling us not to kill each other.

On the other hand, when the government hands us a law that tells us to be ethical, we balk. Ethics is a game that cannot be played unless everyone is playing. If we decide that we should be an example of ethical business, it is a foregone conclusion that business will be lost to the stinking liars and crooks who maintain the old corrupt ways. It is also foreseeable that we will pay much more for our services and supplies. It is also possible that we will not be able to afford the best people.

In business the main goal most of us share is to have a functioning, profitable company. If we sell stuff, we want others to buy it. If we hire people, we want them to perform their duties. If we contract a service, we want to have it fulfilled. This is not so much about ethics as common sense.

My trouble with business ethics is not that we should oppose it, but rather we should address attention to the opposite side of the street. If it is no longer profitable to be a stinking liar or a crook, then suddenly we will all be ethical by default. But as long as regulations are not in place or enforced, as long as it is more beneficial to the business to skirt the law, there will always be players out there doing it - and when the least of us thumbs his nose at the law, the rest of us get sucked into a great chain of unethical behavior.

And we do not have to be, generally speaking, stinking liars and crooks to get caught in this trap.