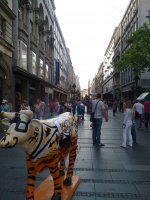 We've all seen them. We pass by. We do not speak to them.

The cows around town, on Trg Republike, on Knez Mihajlova, generally mind their own business. They accost no one for theatre subscriptions, tissues, or wilted flowers. They do not ask the time or directions to Delta City. They look straight ahead into their forward progression or innocuously feed on the weeds growing from cracks in the paving.

These are the Cows Around Town.

The Cows Around Town have been around. They have been in London, in Paris, in Rome. They are the brainchild of Walter Knapp and have purportedly grazed in hundreds of cities around the world since 1998. They call themselves the Cow Parade. But neither pomp nor ostentation follows in their wake. They are just cows of a different color. Not on parade, they are among us.

Some say they have appeared in Belgrade to show support for the ongoing farmer's strike. But the farmers have not discussed this. The cows are apolitical. They do not stand for office. They do not organize rallies. They do not even recognize the passing citizenry.

These are contemplative cows. They suffer themselves to be painted as tigers or splashed with incongruous colors. They bear up stoically under the children riding on their shoulders for photographic moments. They are neither proud nor are they ashamed. They assert their existence by merely existing.

In the deep of the night, the cows remain. They hold vigil even after the ever-earlier official closing of places of business or pleasure. They disturb no one (purposefully that is). They ask nothing of us. When dawn breaks again over the pedestrian walkway, they are there to greet the bleary-eyed and semi-conscious.

They do not judge.

We walk among them. We pass alongside them. We cast sidelong glances and pretend as though it is the most normal thing in the world to observe these Cows Around Town. They proliferate in quiet increments. As more cows appear, we shift our gait and our promenade to accommodate them. Will Belgrade soon be completely overrun with serene bovine presence? The argument has been advanced that the cows were here in spirit before they had physicality.

But in the end, the Cows Around Town have been accepted and they accept us. We coexist peacefully. We have no expectations one of the other. We acknowledge that the space they occupy, in apposition with our own, is to be shared.

One could learn much from the Cows Around Town.