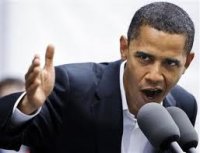 Barker Barack is walking among the tables holding a megaphone, while Treasury Secretary Timothy Geithner follows behind with the original adding machine of Alexander Hamilton (which he picked up for $225 and a collection of old Confederacy currency) toting up the sales.

There is a chair built for the heavy President Taft, until recently kept in Waverly, Iowa, in which it is rumored that he never sat - a bargain at $500. There is the soggy cigar of Bill Clinton (unsmoked) on display in a glass case that reads "Break in case of impeachment." That should fetch a pretty sum, eh Tim?

A transcript of the 18 and ½ minute gap in Nixon's private bugging machine is expected to bring in a few million from Watergate buffs, even if a condition of sale is NOT to read it. The hunting rifle Dick Cheney used to shoot his friends (a donation to the sale from Enron) is already getting bids. George W. Bush's secret map of Iraqi weapons of mass destruction and assorted terrorist hidey-holes will be thrown in to sweeten the pot.

A dictionary from the office of Dan Quayle, on sale for $300. Mint condition.

There is a lot of excitement about the nuclear arsenal (there in the back, next to the NASA equipment, you can't miss it), but Barack is being a little picky about who can actually buy it. He'll soften by late this afternoon I am sure.

Reagan's jelly-bean jar, Ford's broken skis, and Jimmy Carter's toothbrush are on a table marked "Miscellaneous". Barack put everything there which was left around the house when he took over - it is a good thing he kept it all, he smiles in retrospect.

"Ok, people!" Barack drones into the megaphone. "It's all gotta go, and it's all going now. Step right up! We will rein that old deficit by sundown. I guarantee it!" He stops a moment while signing over the auto industry bailout papers to a Chinese shopper in a Panama hat. Tim nods and calculates.

And then there's the real estate. A collection of assorted federal buildings, courthouses, and post offices, complete with the original furnishings is being auctioned off at three o'clock in the Rose Garden (roses: $14.95). Homeland Security will oversee the sale. I've got my eye on a small post office in Wyoming. I will certainly get a better deal because of the rising damp.

When it is all sold and carted away, the keys to the biggest prize of all will be presented to the lucky buyer of the White House. The price will be three trillion dollars (just to round off the day's proceeds). Donald Trump, the odds-on favorite, is waffling unless he can get the Capitol Building for his casino too.

"You see, Tim," Barack beams. "We did not need a higher debt-ceiling after all. And who will notice the lawn chairs and camping table in the Oval Office?"