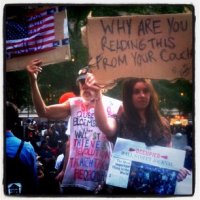 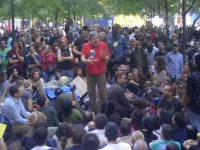 "...They tell you we are dreamers. The true dreamers are those who think that things can go on indefinitely the way they are. We are not dreamers. We are awakening from a dream which is turning into a nightmare. We are not destroying anything. We are only witnessing how the system is destroying itself. We all know the classic scenes from cartoons. The cart reaches a precipice. But it goes on walking. Ignoring the fact that there is nothing beneath. Only when it looks down and notices it, it falls down. This is what we are doing here. We are telling the guys there on Wall Street - Hey, look down!

In April 2011, the Chinese government prohibited on TV and films and in novels all stories that contain alternate reality or time travel. This is a good sign for China. It means that people still dream about alternatives, so you have to prohibit this dream. Here we don't think of prohibition. Because the ruling system has even suppressed our capacity to dream. Look at the movies that we see all the time. It's easy to imagine the end of the world. An asteroid destroying all life and so on. But you cannot imagine the end of capitalism. So what are we doing here? Let me tell you a wonderful old joke from communist times.

A guy was sent from East Germany to work in Siberia. He knew his mail would be read by censors. So he told his friends: Let's establish a code. If the letter you get from me is written in blue ink ,it is true what I said. If it is written in red ink, it is false. After a month his friends get a first letter. Everything is in blue. It says, this letter: everything is wonderful here. Stores are full of good food. Movie theaters show good films from the West. Apartments are large and luxurious. The only thing you cannot buy is red ink.

This is how we live. We have all the freedoms we want. But what we are missing is red ink. The language to articulate our non-freedom. The way we are taught to speak about freedom war and terrorism and so on falsifies freedom. And this is what you are doing here: You are giving all of us red ink.

There is a danger. Don't fall in love with yourselves. We have a nice time here. But remember: carnivals come cheap. What matters is the day after. When we will have to return to normal life. Will there be any changes then. I don't want you to remember these days, you know, like - oh, we were young, it was beautiful. Remember that our basic message is: We are allowed to think about alternatives. The rule is broken. We do not live in the best possible world. But there is a long road ahead. There are truly difficult questions that confront us. We know what we do not want. But what do we want? What social organization can replace capitalism? What type of new leaders do we want?

Remember: the problem is not corruption or greed. The problem is the system that pushes you to give up. Beware not only of the enemies. But also of false friends who are already working to dilute this process. In the same way you get coffee without caffeine, beer without alcohol,  ice cream without fat. They will try to make this into a harmless moral protest.

We can see that for a long time we allowed our political engagement also to be outsourced. We want it back. We are not communists. If communism means the system which collapsed in 1990, remember that today those communists are the most efficient ruthless capitalists. In China today we have capitalism which is even more dynamic than your American capitalism but doesn't need democracy. Which means when you criticize capitalism, don't allow yourselves to be blackmailed that you are against democracy. The marriage between democracy and capitalism is over.

The change is possible. So, what do we consider today possible? Just follow the media. On the one hand in technology and sexuality everything seems to be possible. You can travel to the moon. You can become immortal by biogenetics. You can have sex with animals or whatever. But look at the fields of society and economy. There almost everything is considered impossible. You want to raise taxes a little bit for the rich, they tell you it's impossible, we lose competitivitiy. You want more money for healthcare: they tell you impossible, this means a totalitarian state. There is something wrong in the world where you are promised to be immortal but cannot spend a little bit more for health care. .. We don't want higher standards of living. We want better standards of living. The only sense in which we are communists is that we care for the commons. The commons of nature. The commons of what is privatized by intellectual property. The commons of biogenetics. For this and only for this we should fight.

Communism failed absolutely. But the problems of the commons are here. They are telling you we are not Americans here. But the conservative fundamentalists who claim they are really American have to be reminded of something. What is Christianity? It's the Holy Spirit. What's the Holy Spirit? It's an egalitarian community of believers who are linked by love for each other. And who only have their own freedom and responsibility to do it. In this sense the Holy Spirit is here now. And down there on Wall Street there are pagans who are worshipping blasphemous idols. So all we need is patience. The only thing I'm afraid of is that we will someday just go home and then we will meet once a year, drinking beer, and nostalgically remembering what a nice time we had here. Promise ourselves that this will not be the case.

We know that people often desire something but do not really want it. Don't be afraid to really want what you desire."