Of Women and Men 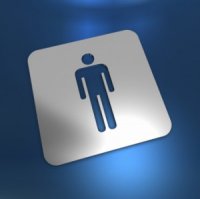 This is the trouble with crowdsourcing.

I have been asked to write about the relationship between men and women. In order to do so, I am forced to call upon my many years experience as a male and attempt to relate the relative truths and gleanings from this experience into a form which will elucidate and provide the invaluable insight which this topic requires and deserves. The effort has been extreme, but I finally believe that I might impart this wisdom - the sum total of my understanding of the relationship between women and men.

This having been said, I do know a thing or two about women in the men's room. I know, for example, that they are not supposed to be there. One day last week, however, I had occasion to visit three different men's rooms in three different public places. And each time, there was a woman there.

In the prudish primitive culture from which I sprang, it was generally thought of as unthinkable to have a woman in the men's room. It is an unwritten rule - no one having bothered to write it down because it would appear self-evident. If we posit the existence of separate lavatories for men and women, it is presupposed that each sex would repair to their respective doors, willingly and devoid of argument.

The women in the men's room this week were not patrons (note the gender-specific term), but they were there cleaning. One agrees with cleaning the lavatories. One does not object to their being as hygienic as possible. One does not even object too strongly to the overpowering ammoniac smell of the disinfectant. But one (i.e., this one, i.e., me) does NOT expect to see the cleaning going on while one is going about one's bathroomly business.

One expects to wait rather uncomfortably and impatiently in the corridor in front of a sign that says something like closed for maintenance or closed for cleaning or closed-due-to-the-presence-of-females- in-what-is-traditionally-a-space-reserved-for-males, the-Last-Bastion-of-sanctioned-segregation.

In all three cases last week, the women carried on regardless with their duties. Cleaning and straightening while the toilet was being trafficked by several men. I note, further, that no one except me seemed to think this was strange or somehow unusual. Not wanting to make a scene, I pretended that I was cool with this turn of events. And I admit that this was far from the first time this has captured my attention in the ten years I have been in Serbia. But it happened three times that day. When things occur in threes, it MUST mean something...

So there they were, minding their own business and probably at least a little of our business. The thought then scurried across my mind as to what would happen if it were reversed. Putting the shoe on the other foot, a man cleaning a ladies' room in the presence of women would likely result in a police action.

Let's just call this an Observation and move on, I think. See you around the urinal.