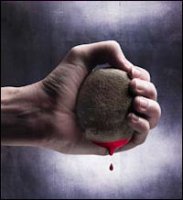 Ironically, when the government overspends (as they are doing consistently), the great thinkers in charge of the Brilliant Ideas Department think that they can just off-load this kind of recklessness onto the consumers. Problem solved! Not enough money? More taxes!

Sadly, when the CONSUMER overspends, we are left to squeeze the stones. For the most part, in this highly regulated and boisterously bureaucratic society, we are not allowed to overspend. But if the consumer does manage to overspend his budget, he is left out in the cold. He is thrown off the bus. He is threatened with sanctions; he may be jailed; or he may just be beaten up by disgruntled creditors.

Just as a side note, I would like to point out that we live in a Consumer Society. This means, essentially, that the consumer is the driving force behind everything. The things we build and the services we offer are ultimately paid for by the consumer. When he is out of money, then the system should go offline.

But now, rather than coming with innovation and good ideas to fuel the consumer machine (i.e., put more money in the consumers' pockets so they go out and spend and keep the wheels of commerce spinning), we do the opposite. We decide that it is Wise to extract more money from the consumer while expecting him to keep our coveted system turning....

As to raising taxes, let's be honest with ourselves. This will ALWAYS happen. It is the nature of taxes to go up. But I think we should expect a little more bang for our buck. If the prices of bus tickets go up, we should expect better service, not just a bigger congregation of BusPlus inspectors in their branded polo shirts haunting the bus stops.

The VAT hike is the most ironic of all. Bigger Value Added Tax makes everything costlier, but what value has been increased proportionately? It is pure fantasy.

The pressure is building in the boiler. As a consumer, I feel affronted to live in a country where the average earnings do not cover the average consumer grocery bill and then to hear our elected officials (i.e., chosen by the people) tell us that the best way out of the crisis is to make the cash-strapped Serbian public pay for it.

Something is wrong, Prince John. The peasants are revolting.

I apologize if this blog has turned into a rant, but I think it is time for people to be angry about all this. The policy of squeezing stones will eventually leave us a pile of gravel.