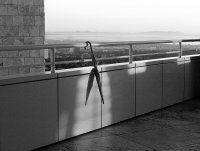 The backstory is equally ridiculous, but that is entirely my fault. Yesterday, sensing rain, I went out into the streets armed with my umbrella. An umbrella, as we all know, very nearly qualifies as public property. If you leave it someplace, it is no longer yours but passes into the public domain on the basis of need. This having been said, I was somewhat attached to this particular umbrella. I had kept it for at least 8 months without losing it. It was the right size and worked well. For the past months, it has served as my principle umbrella while the primary and secondary backups remained in the trunk of my car.

I stopped by the kiosk on Trg Republika to take out my hat and gloves, and, in so doing, hooked my umbrella on the adjacent ice cream stand. I then walked away without my umbrella - realizing the omission only eight bus stops later. My point is that I did not actually lose the umbrella, but I abandoned it.

Thinking today that I might try to see if some kindly soul had kept the abandoned umbrella for me, I stopped by the kiosk to ask if it had been found. Hence the yes or no question. I asked the woman nicely, noting that I had left it by accident on her ice cream wagon.

This is a classic Schrödinger's Cat scenario wherein the answer, ensconced inside her head, could be simultaneously both yes and no. I will never know if she found my umbrella and gave it to her nephew Vuk who went out yesterday without one and ran the risk of catching a cold. Or not. She flatly refused to answer my question, but she opened up a larger one.

Her response meant to me that she wanted a dialogue on the Nature of Civic Responsibility. In this dialectic, I already had three strikes against me: a) I was stupid enough to leave it there; b) it is not her ice cream and therefore does not behoove her to feel responsible for items left thereupon, c) and I was naive enough to come back and ask about it.

The interesting part to me is the circuitous route which led her from my question to her neighbor's ice cream. I asked about an umbrella. She heard me accusing her of having an ice cream wagon. From having the wagon, she moved quickly along to whose responsibility it might be for the wagon, and who should answer questions about it, and how could I possibly think that she might be answerable to its inadvertent contents (i.e., my umbrella). And, therefore: "It's not my ice cream."

Tomorrow, with my primary backup umbrella in hand, I will stop by again and ask to buy an ice cream from her.