My name is Neil Dymock and I am one of the Trustees of the Welsh Football Supporters Charity Gôl! here to tell you of an exciting initiative we are doing this November, in conjunction with the British Embassy here in Belgrade.

Gôl! was launched in November 2002 by a group of Welsh football fans, who wanted to make a difference to a local community in Baku, Azerbaijan following the Welsh football team.  The idea began in a bus conversation between Dylan Llewellyn, Neil Dymock and Gary Pritchard who were on their way to watch Wales play an Under 21 game against Finland in Valkeakoski two months before.  In Azerbaijan, we visited several orphanages in Baku with gifts of footballs, football kits, toys and cash donations.

On our return, we decided to carry on fundraising and came up with the name Gôl which means Goal in Welsh.  We formed an informal charitable organisation and continued visiting orphanages, childrens homes and hospitals, whenever Wales played abroad.  We then decided to help underprivileged children in Wales watch Wales play in Cardiff and terminally ill children, those suffering from Leukaemia and children who normally would not have the opportunity to see Gareth Bale and co play, can now watch Wales.  In October 2008, we applied for charitable status with the Inland Revenue and now have a charity number, XT14176.

I have been involved with Gôl since its infancy and have been to all of the 50+ places Gôl have visited in the last fourteen years.  It has been a labour of love during this time, but totally worthwhile, with so many Wales fans involved with Gôl, be it by coming along on an orphanage visit, or simply buying a raffle ticket. I remember one Wales supporter won a table football game in a raffle at work and he brought it all the way to Azerbaijan to give it to an orphan.  The Welsh Football team can be very proud of their fans, who aim to make a difference at every game.

A lot of people ask me from time to time how and why we achieve what we do with Gôl.  Watching Wales around the world is a privilege; you make great friends for life from all over Wales, travel to places most people have never heard of, and have stories to tell that people wouldn't even think of making up.  However the answer is simple; we can!  One of the people inspirational in obtaining souvenirs and prizes to raffle which helped raise the money to donate to those first three causes in Azerbaijan, is no longer with us. Maralyn Olsen was a retired school teacher and Welsh Football supporter who did so much for Gôl before she sadly lost her fight against cancer in January 2004. She has been a massive loss to Gôl and Welsh Football in general. Gôl continues with her spirit and those of other Wales fans no longer with us.

We have previously visited the Dom Za Decu Bez Roditelja in Belgrade on three occasions, twice in 2003 and again in 2012. In 2003, as Gary Speed led out the Welsh team in the Red Star Belgrade stadium before the match with Serbia & Montenegro in August, the endeavours of the Welsh football supporters' appeal, Gôl!, meant that 35 children from the city's orphanage were able to witness the all important game in Group 9.  As well as buying tickets to allow the children to watch experience the match in the flesh, Gôl had arranged to visit the orphanage to deliver goods which had been collected months previously. Amongst the gifts were pyjamas kindly donated by Aykroyds of Bala, T-shirts and toothbrushes given by the S4C childrens' programme Uned 5, football kits donated by Merthyr Tydfil, Cardiff Ladies FC and Everton, childrens' videos donated by BBC Wales, soft toys given by the Bow Street Grwp Help Llaw near Aberystwyth and toothpaste given by B.K. Humphries dental surgery in Caernarfon.

A hardy band of Gôl supporters had visited the orphanage in the April, even though the scheduled match between Wales and Serbia & Montenegro had been postponed following the assassination of the country's Prime Minister.  Such was the welcome received, that it was decided to revisit the orphanage to deliver the rest of the gifts as well as making a cash donation and presenting the match tickets. Once the gifts were presented, the boys were eager to show off their footballing skills, and to be honest, they didn't think much of our chances in a 'friendly' 5-a-side match.

We returned here in 2012, to make more donations at the orphanage and visit some old friends. On this occasion though, we also took time out to visit a school in Belgrade and brought educational books from Wales to help the children attending the school. 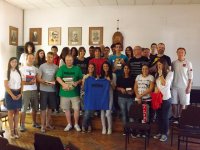 This brings me nicely onto November 2016, when Serbia will travel to Cardiff to face Wales in a World Cup Qualifier in Cardiff. With help from the British Embassy, Gôl plan to bring four children, two girls and two boys along with two adult carers, over to Wales to be guests at the game, as well as visit several educational and tourist attractions while in Wales.  In the past, Gôl have brought children from Azerbaijan and Montenegro to Wales, and it is hoped a similar itinerary to these visits will allow these Serbian children to have a unique opportunity to visit Wales. On previous itineraries, there have been visits to London, to a South Wales Fire Station, to a Welsh School, and down a Welsh Coal Mine.

If you would like to make a donation towards our fundraising total, you can do so at the following site......