To Kosovo and back 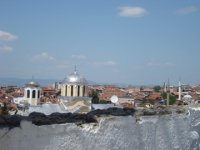 Prizren
“Remember, if you get into trouble, just yell, ‘Živela Srbija.’ It’s better to go out with a bang,” a friend of mine remarked in jest as I left his apartment on my way to the station to catch a bus down to Kosovo. “I would tell you ‘lepo se provedi,’” his roommate added with a wink, “but I know you’re going to Priština."

Quite honestly, I was nervous about the trip. Since my arrival last fall I had wanted to see the province I had heard so much about, and an Albanian friend in Priština had extended an open invitation, but the occasional reports over the last six months or so of bombed UN or OSCE vehicles troubled me a bit, as did the idea of my unnecessary American presence further complicating an already precarious situation. But when three American students called me to say they were heading down to Kosovo two weeks ago, I decided to join them.

The four of us arrived at the Kosovo border at two in the morning and were greeted by a Kosovar Albanian guard. Seeing our American passports he shook our hands and one after another looked us in the eye and said, “God bless America.” And as he turned to walk down the bus aisle, he looked back and said, “You are always welcome in Kosovo.”

Once in Priština we met my friend Enis and his roommate, both students studying in the capital city. Together we wandered around town, past large shiny UN, OSCE, and EU buildings, old mosques, a strip of tastefully decorated cafés under the shade of chestnut trees, and a book fair.

The city’s walls were covered with the slogan “Jo Negociata. Vetevendosje” (No Negotiations. Self-determination), uniformly stenciled in black and red. From the city’s taller buildings hung giant posters of men who stood for a free Kosovo: the first President of Kosovo Ibrahim Rugova, one-time KLA commander Adem Jashari, and former US President Bill Clinton, who smiles and waves to the passersby on Bil Klinton Blvd.

Referencing Rugova, Enis said, “He was our president.” Referencing Jashari his roommate said, “He was our legend. What he did, Kosovo really needed.” And in regards to Clinton, they asked what we thought. I for one wasn’t sure what to make of it. I had expected that to be in a place where America is revered would be easier than to be in one where it is hated, but the hand shake, the “God bless America,” and the giant face of Bill were all too much. Someone was manipulating someone here, but whether it was the Albanians sucking America into their battle or America twisting the battle into a tool of imperialism guised as freedom, I couldn’t say. Enis said the people of Kosovo hung the poster of Bill to show their appreciation for what he had done. “He’s a really good man I think. Hillary, I’m not so sure, but Bill Clinton is a really great man.”

Conversation eventually turned to Belgrade. Enis had been to the Serbian capital, and, with the exception of a story of a cab driver who cursed him for being Albanian, he had only good things to say. His roommate, however, had never been further than Montenegro. He asked me again and again what the city was like - How are the people there? Does it look like Priština? Do the women dress as provocatively?

I told him the people I knew in Belgrade were great and would give him no problems if he were to come, but that my knowledge was only based on my limited circle of friends. I told him it was like Priština but much bigger. And I told him yes, the girls dress provocatively, even more so than in Kosovo.

He said he was scared of Belgrade. He wanted to go to renew his Serbian passport - apparently in some cases it’s actually easier to travel with Serbian documents than with the UN issued travel papers - but he said he was afraid, not so much of the Serbs from Belgrade but of the Serbs from Kosovo who had moved to Belgrade. He told me a story about his father who went to Niš not long ago. He said he ran into an old friend from his town who had moved there during the war. The friend was drunk, and a police officer, and his father was terrified. He ended the story there. 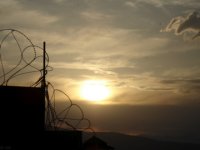 The next day we left Priština, and the four of us headed down to Prizren in the very south of Kosovo. A striking contrast to Priština with its jumbled, concrete facades, Prizren bore the regional standards: cobblestone streets, low roofed storefronts, and a centuries-old fort high up on a nearby hill. Yet unlike its Serbian counterparts of Niš or Novi Pazar, this southern town was filled with soldiers and razor wire - the first eating ice cream and the second guarding sights of Serbian Orthodox cultural heritage.

After a night in Prizren we headed west to Dečan to see the monastery tucked into the hills just outside the town. Visoki Dečani Monastery is one of the many Serbian Orthodox religious sights that dot this southern province with their beautiful frescoes, long-bearded monks, and high-security international protection. Back in March an explosion was heard from the monastery, and officials later concluded it was a grenade detonated as a warning to the monks and international forces based there. 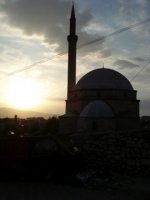 The story weighed heavily in my mind as we climbed out of the bus that dropped us off in the center of Dečan across from a park decorated with six Albanian flags. According to Martti Ahtisaari’s proposal, Kosovo will get its own flag soon, but for now it continues to use the flag of Albania with its deep red background framing the black silhouette of a two-headed eagle. The black and red of the flags alone bore a sinister air, and that they marked the fact that we were entering an Albanian village in order to see a great Serbian sight left me all the more unsettled.

Hailing a taxi, we started up the tree-lined road to the monastery. Half a kilometer short of our destination we came to the KFOR guard post with a glass booth on the right and a well-protected guardhouse on the left. The road was blocked with large cement cones forcing oncoming cars to slowly wind their way toward the station. They took our passports. All the guards carried very large guns.

After a long ten minutes they let us into the monastery. Passing through the large archway in the wall that surrounded the compound was like entering a different world. The lawn was green and filled with a large crowd of children intermixed with parents, robed monks, and KFOR soldiers. It was spasovdan, the day of ascension. They were having a picnic. 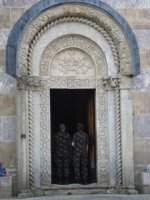 We remained for half an hour then returned to town. I was relieved to have again put some distance between myself and the monastery’s world of intensely contradictory sights with its children and soldiers, its picnic coolers and guard posts.

Dečani Monastery was our last stop in Kosovo, and from there I made my way back to Belgrade. When I returned, I was surprised by how many questions I received about a place that in some ways appeared no different from the rest of Southern Serbia. What do the people look like? Do they dress like people here? What does Priština look like? What languages did you hear? The questions went on and on but were the same from everyone. An older friend of mine explained her questioning by relaying her childhood experience of the place. Her family regularly drove from Greece to Montenegro, passing through Kosovo on the way. “My dad would never let us out of the car to pee,” she said, “We just zipped right through every time. So many years and we never stopped.”

In the end, the strangest aspect of my trip was not the soldiers with their guns, the ever-present razor wire, nor Bill’s large grinning face. But rather, it was passing from one void of ignorance into another and back again that left me confounded about the place and its possible futures. How is it that I, an outsider for whom the issue of Kosovo matters little, could freely walk where the people of Serbia cannot, or choose not, and that I could returned to a city where the people of Kosovo fear to journey?

Over the last decade, my country may have demonstrated a willingness to act the part of the all-knowing middleman, the go-between for two sides incredibly alike in their daily lives and in their half-knowledge of one other, but I for one am not prepared for that role. Yet in my trip, and in this blog, that’s exactly the role I have managed played.

Someone is manipulating someone here.