Some indigenous people of North America call the polar lights "Dance of the Spirits".

The short poems that will appear here in a sequence titled "Bipolar lights" can be interpreted as my personal "Dance of the Spirits". The mood changes from one end to another with very little in between. In fact, the poems are divided into two cycles, one called "Day" and the other "Night". 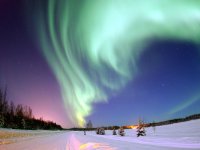 This is not to say that I am always in an extreme mood. Rather, the poems are reflections on the rare moments when I felt the extreme but true ends of my soul. The ends that are bare and free. The ends I do not reach often, but are true precisely because of that. I do not know how to pretend there. It is me.

The poems are put on paper not a long ago, but I was carrying some of them in my heart for a long time. Some reflect on my recent state of mind and some are faint traces - memories of distant emotions. Most often, no particular events are described even when it looks otherwise. It is the mood that I am trying to recall, not events. Perhaps this is why verbs are often avoided and the poems are relatively brief. Stroboscopic images of me. Of anyone.

Some weeks I might post poems that are close to each other in some respect and some weeks I just may post a small smorgasbord. I do not know where I am going and how long it will last. The poems are written (literally) simultaneously in three languages. This sometimes causes unusual constructions in one of the languages. I will post here only the  Serbian versions.

zar si me i ti napustila