Across central and south east Europe, coalitions of conservationists and communities are up in arms about the marauding mass of ski resorts currently being developed in ostensibly protected areas, many of them Important Bird Areas. James Lowen investigates.

This article first appeared in World Birdwatch, the award-winning magazine from BirdLife International, full of in-depth articles about the work of the BirdLife Partnership and all the latest bird conservation news from around the globe. For more information and for details on how to subscribe visit http://www.birdlife.org/

The skier jinks off the black run, heading off piste. Hurtling downhill, he flushes a large black bird hiding from predators in an ‘igloo' in the snow. Adrenalin flowing and forced to burn valuable calories, the Black Grouse Tetrao tetrix flees for the safety of a remaining forest fragment.

Neither skier nor grouse are alone. Rising living standards and cheaper air travel underlie the recent explosion of winter sports across Europe. As demand for snowy slopes multiplies, skiers head farther afield for pristine pistes. And  governments and developers are whizzing down the metaphorical black run to supply them, riding roughshod over legality, financial sustainability and biodiversity in the process.

The wintry conflict between developers and governments on one side and, on the other, committed conservationists (including BirdLife Partners) reaches its peak in national parks the length of the Carpathian, Balkan and Rilo-Rhodopean Mountains in Bulgaria, Romania, Serbia and Slovakia. These ostensibly protected areas are of international importance for wildlife conservation in what Boris Barov, BirdLife's European Conservation Manager, calls "Europe's best-preserved montane biodiversity and ecosystems". Almost all are Important Bird Areas (IBAs), housing several Species of European Conservation Concern (SPECs; see box).

Fears of an impending environmental blight are wellfounded. Research in western Europe demonstrates that ski tourism has profoundly harmful impacts on habitats and species. For Antonio Rolando, a leading researcher in the field, ski resort development is currently "one of the most detrimental anthropogenic threats to alpine bird communities".

Forests, other montane vegetation and soils are bulldozed and fragmented to make way for pistes and access infrastructure. The results are incontrovertible: plant and bird diversity and density are lower on and near ski pistes relative to undisturbed areas. SPECs such as Crested Tit Parus cristatus shun the newly created forest edge, while others such as Wood Lark Lullula arborea and Redbacked Shrike Lanius collurio avoid ski runs, probably because of their lower arthropod richness and abundance.

It also takes little to upset the finely tuned physiology characterising animals inhabiting alpine habitats. Grouse appear particularly susceptible. Disturbance by snowboarders has been shown to elevate stress hormone levels in Black Grouse; densities around ski resorts are a third lower than elsewhere. Rock Ptarmigan Lagopus muta breeding success is lower near ski infrastructure. Western Capercaillie Tetrao urogallus has become extinct near numerous Alpine ski stations, a phenomenon that Josef Ridzon, Conservation Manager at SOS/BirdLife Slovakia, fears may be replicated in Slovakia: "if the situation with ski resorts does not change soon, Capercaillie may join the list of extinctions in some mountains".

In a recent study, the World Wildlife Fund found that nearly 50 ski resorts have been constructed or are planned for evidently unsafe havens in the Carpathians. The areas targeted are theoretically conserved by overlapping international categorisations (such as UNESCO World Heritage Sites), national designations (national parks) and, for European Union Member States, Community legislation (such as the Natura 2000 network of Special Protected Areas [or SPAs] and Special Areas of Conservation [or SACs]). Yet ski-resort developers and governments are sidestepping legal obligations, paying mere lip service to Environmental Impact Assessments (EIAs) and ignoring calls for public participation.

The scale of development beggars belief. Of 100 sites identified by the Romanian government's ‘Ski in Romania' initiative, half are in SACs and a fifth in SPAs. In Slovakia, 30 developments are proposed, the largest being in Slovak Paradise National Park. This project is likely to be subsidised by EU Structural Funds so European taxpayers and institutions may unknowingly finance a wildlife calamity. In Ukraine, a massive ski complex costing €3 billion is being constructed near the Carpathian Biosphere Reserve.

Their ire ignited by the private and public sectors' flagrant disregard for legality and transparency, conservationists along the Carpathians and beyond have leapt into action. In Bulgaria, the most deleterious developments have prompted public outcry. Pirin National Park, a UNESCO World Heritage Site for 25 years, now hosts the Bansko Ski Resort. In 2006, the Save Pirin NGO coalition, whose members include BSPB (BirdLife in Bulgaria), released a damning report that tarred Bansko as "one of the most calamitous environmental crimes in Bulgaria in the last 15 years". The report's authors concluded that the government's EIA decisions breached national and international legislation, and that the developer had violated every requirement of those flawed decisions.

Nevertheless, Bansko opened Bulgaria's floodgates, developers surmising that they need not worry about legal niceties  in their quest for a fast buck. Next, the government overruled legal objections to construction of a ski lift and access road in Rila National Park. This incited a grassroots group, Citizens for Rila, to present more than 160,000 signatures opposing the project to Community institutions, and complain to the European Commission regarding Bulgaria's contravention of EU nature legislation. For David Morand, President of France-Rila, this "scandalous, ecologically irresponsible and illegal" ski resort has "broken dozens of European and Bulgarian laws".

In Slovakia, IBAs such as High Tatras National Park are under threat. Five ski areas are currently being developed, prompting the European Commission to investigate the impacts of development in Natura 2000 sites. For Jozef Ridzon, ski resorts could be the proverbial straw that breaks the Slovakian Carpathians' camelid back: "Many mountainous regions are already threatened by intensive forest management, and are starting to suffer from climate change. Ski resorts are the next negative element".

In Serbia, the Government has given the green light to a resort for 40,000 skiers in Stara Planina Nature Park, another IBA. Some 3,000 hectares of coniferous forests and montane meadows-home to scarce birds such as Saker Falcon Falco cherrug (Endangered), Corncrake Crex crex (Near Threatened) and the Balkans' only breeding Eurasian Dotterel Eudromius morinellus-face clearance. A coalition of 60 NGOs has formed the Association for Preservation and Sustainable Development of Stara Planina to oppose the development, lobbying senior politicians, filing legal objections and organising an online petition. "If the plans go ahead, the greatest loser will be the park's wildlife because it cannot move elsewhere", explains Dragan Simić, vice-chair of the League for Ornithological Action of Serbia. "Ski resorts are to mountains what tropical strangler figs are to their host trees, enveloping them until final asphyxiation."

Ski resort problems go beyond illegality and biodiversity loss. Throughout the Carpathians and even into Greece, opponents contend that the promised socio-economic benefits of development will never materialise. Previously supportive, a third of Bansko citizens now feel worse off due to the development; a further half perceive no benefit. Protesters at Stara Planina disagree that ski development will improve local living standards: "there will not be many jobs for the local population", argues Dragan Simić, "once built, the ski centre will leave locals aside". Simić and collaborators calculate that the €31 million that the Serbian government had originally budgeted for resort development during 2008 would be sufficient for 500 households to establish a sustainable agro-tourism business.

Scepticism of sustainability is widespread. Almost all Carpathian resorts are being planned for altitudes below 1,500 m. Should predictions about warming temperatures be accurate, the resorts' physical shelf life will be much shorter than developers and governments envisage. Rather than providing financially sustainable contributions to local livelihoods, "climate change places serious doubt on the long-term economic viability of and justification for new ski resorts in  southern Europe", argues Boris Barov.

But there is good news too. The tide of public opinion is turning: 80% of Bulgarians now oppose further construction in national parks. Environmental awareness is also rising among Europe's skiing community: the Ski Club of Great Britain publishes a Green resort guide that assesses resorts' efforts to minimise adverse environmental impacts, candidly detailing objections to Bansko. Critically, conservation coalitions are getting their collective voice heard in the seat of European power. In 2007, the European Court of Justice ruled that Italy had failed to assess the environmental impact of works to modify ski runs in Stelvio National Park, a Special Protection Area and IBA-a judgement that serves as a warning to new Member States. In October 2008, a European Parliament delegation visited Bulgaria, examining the devastation wrought at Rila. The following month, the European Commission bared its teeth at Bulgaria, opening infringement proceedings for (non-ski resort) construction projects in the Kaliakra Special Protection Area, a signal that lawmakers will not tolerate further contravention of the Birds Directive.

Like all national and local conservation organisations, BirdLife Partners have been stymied by governments and developers colluding behind closed doors before emerging with illegal faits accomplis. But the Partnership is now sharing its experiences, strengthening its role and clarifying its Europewide demands. BirdLife wants ski resort development and expansion to adhere to environmental legislation on impact assessment and to avoid protected areas. Overall, says Boris Barov, the Partnership "seeks a significant reduction in the number and size of planned resorts". Due to collaboration between BirdLife Partners and others, a chink of blue is now appearing in the otherwise leaden sky above the Carpathians' reserves-cumresorts. That Black Grouse may yet return to its igloo, unmolested, while the skier slaloms elsewhere. 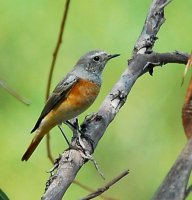 1. A significant reduction in the number and size of planned new ski resorts.

4. Integrate an assessment of ‘wilderness' quality into the determination of the conservation status of Natura 2000 sites.

5. Inform consumers by raising public and skier awareness of the environmental footprint of ski resorts.

To read the WWF report on ski resorts visit http://tinyurl.com/b7y23k