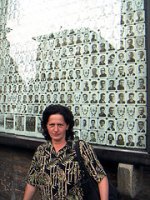 The mothers of mass graves

Nura comes from Srebrenica and she goes to places where her voice needs to be heard. For those who don’t know and the many who still refuse to know, Srebrenica was and is the enclave of genocide in Bosnia, committed there in 1995 by General Ratko Mladic and his soldiers.

Mladic is still in hiding from the justice of the international war tribunal in The Hague. The day Nura came to Italy from her hometown, another war criminal, the helper of Mladic, was arrested by police in Bosnia. Nura saw helicopters above her head.

Some claim the arrest was all staged. How could the third most wanted Srbrenica criminal be be arrested within Bosnia? Obviously a conspiracy was hiding him in the center of Belgrade, that capital from where all the evil orders were given by the late Slobodan Milosevic.

Says Nura calmly: that guy is half dead and only a stuntman for the real issue: the issue of hiding Mladic. It is a farce, who do they want to fool? Carla del Ponte arriving in Belgrade to check on the Serbian secret police, always involved in hiding war criminals more than finding them. While us, the citizens from the enclave, still have to live under the power and law of those who killed our men en masse and raped women who failed to flee. Ten thousand people missing, twenty-five hundred of them found in mass graves.
At first, says Nura, we Srebrenica mothers were looking for our missing loved ones. Then we looked only for a bone or two to bury. Now, my only hope is to prevent this horror from happening again.

I loved the old multi-ethnic Bosnia, where we all lived together. We didn’t care about religions, we never dressed or behaved like nationalists. Who do they want to fool by claiming that this tragedy was necessary? Necessary or what? Srebrenica needs a spacial status: a failed enclave become a mass grave. We are not going to leave Srebrenica: we are going to bring all you other women here...
And we other women will go there. Women in Black from Serbia go to Srebrenica all the time, soon to be joined by Women in Black from Italy. The group of Mothers from Srebrenica will together with Women in Black to the the nearby village of Bratunac, where Serb civilians were killed by Bosnian soldiers.
In Bologna, my chronicles of the Srebrenica genocide trial were adapted for the stage by a young theater group. I struggled to interpret my own words back from Italian, but Nura understood their macabre ballet. She saw in their body language the pain of the dead, the grief of the survivors and the guilt of the perpetrators. Nura asked me to tell them to come to the mass graves of Srebrenica and perform their work there. The language of crime is universal. It always has the sound of war.

In the meantime the borders between ethnic entities are getting tougher, the Serbian nationalists in Belgrade are getting louder, the international community with its regular policy of “let them fight it out” is getting sloppier. What will become of us all: this official Europe without a constitution, this unofficial Europe with a fake rule of law? Shall we ever meet, or just disintegrate in tandem?
Nura looks straight into my eyes as I pose that difficult question to the Italian alterglobalists who fight against G8. Bush and Putin are the left and right sides of the same game, called: See you in the next war, pal...
You must endure, Nura says. Nobody can do justice for the dead, but instead of failing others as others have failed us, we ourselves can do justice for somebody else. We intend to sue the UN troops for delivering us to the killers instead of protecting us. War and war crimes have a pattern, their design is predictable. In this new technological century, war crimes can be predicted and outguessed: a quest for justice as universal as the Internet.