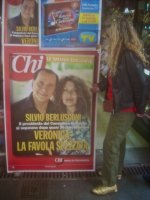 How can one write about Silvio Berlusconi?

He is beyond any taste and above any doubt.  Berlusconi, Italy's longest-serving Prime Minister ever, has been in or near power for years on end.  It seems as if he will stay there forever. The damage he has done  to this beautiful country with its wobbling democracy is beyond repair.  With his clown face and cheeky ignorance, he matches Bush and Mussolini.

When one thinks of modern Italy, one inevitably thinks of Silvio Berlusconi as its personification.  Forget la dolce vita, the Trevi fountain,  spaghetti and pizza,  fine wines like Barolo, Chianti and Barbera: think rude and ignorant politicians,  sex scandals, mafia-style palace intrigues, the dark times of an empire.

However, these days, after thirty years of a so-called happy marriage with three children, the couple Berlusconi seems to be in a divorce. Berlusconi -- Italy's most powerful media mogul ever --  of course still dominates the screens and front pages of his  own media machine.   But now he's roasted by the opposition media, with his teenage girlfriend pursued by paparazzi.

The wreckage of public opinion in Italy's unfree press can scarcely be called a real "opposition," but it still understands a sex scandal.    Italians witness endless TV news and tabloid coverage of  Berlusconi's latest infidelity to "his Veronica"  -- this time, stunningly, with the underage daughter of a Berlusconi courtier, a woman who turned 18 just a week ago.

She calls the president of Italy "Daddy."   The paparazzi adored Carla Bruni-Sarkozy, but this preposterous effrontery beats everything.   No room left in Italian media for the weary tales of African clandestini on their homemade boats, pitchforked from the coasts of Italy as they flee here for their miserable lives:  a historical turn for Italian politics.  Another historical turn for Italian  politics is the mass-action lawsuit underway in Torino for the asbestos damage to the lungs of thousands of workers, inflicted by a factory which never recognized any guilt for two thousand dead.  Of course that number is slowly rising, like some apocalyptic horror story.  It's a slow,
complicated horror, the kind the media doesn't like and can't sell from kiosks with banner headlines.   The relatives of the two thousand dead -- some of them also  sick -- bear their witness in tears,  in bitter arguments in front of the public attorney: but the bench of the accused is empty.  Today's traumatized capitalism lacks a face, but a prime minister's divorce has three faces.  One of them is eighteen years old.

The people of Italy are more Catholic than the Pope.  They're also more Moslem than an ayatollah, for recent polls suggest that six out of ten Italians still support Berlusconi and his Viagra harem.   His wife took public offense when Berlusconi stuffed his cabinet with right-wing go go girls.  Signora Berlusconi is his second wife, and a former TV star herself, so she was not enchanted by the mediated spectacle of pretty young women used as sex-toys in power.    Berlusconi's current cabinet -- packed show faces -- looks young and lively compared to the gray, nostalgic earnestness of  Italian leftists.  But the sudden earthquake eruption of an 18-year-old girlfriend makes that whole effort look sick and sinister.

Berlusconi claims that all politics is mere media:   his foolish wife has been manipulated by the cunning opposition to create a phony media scandal.   He jokes -- Berlusconi always jokes -- that the alleged girlfriend calls him "Daddy" because "Grand-daddy" would have been even worse.
Will  that be a national catastrophe -- like the recent earthquake in  L'Aquila?   That shattered  city is still wracked with tremors, and yet Berlusconi plans to host the next G8 meeting there, with all the major world leaders, on camera.  A media mogul in power ruins everything, then he builds fresh publicity from the ruins.