There I was, just about to close down my factory and send the workers home for the holidays, when it suddenly dawned on me. I could get Bailed Out!

My factory has for years produced the best possible Bicycles for Tropical Fish (BTFs). We had no rivals in any market! No one made a better BTF in the entire world. Rightfully, we were very proud of this achievement and our factory output surged with Pride in Workmanship, a Strong and Healthy Work Ethic, and most of the other jingoes which the US auto industry Nawabs were singing over the last few weeks. The thought of getting the US Congress to bail me out has lifted my spirits greatly! 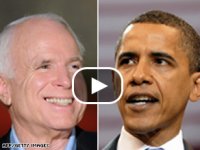 The US election will get underway in several hours as I write this and will surely be done and put to bed by the time you are reading this, but I feel that I have legitimate gripe to make NOW before even I know the outcome of the elections (and before I go around paying out on my bets for John McCain).

I have been, as most of the US and a big chunk of the televisually linked world, keeping up with the presidential campaign through the most readily accessible means available to me: CNN. And each day I switch it on, I have been getting progressively more angry at them.

The juggling act is about to begin...

When the decision was finally made to cough up USD 700 billion to bailout the Greatest Financial Show on Earth, the American taxpayer's elected representatives decided to give the poor silly bankers another chance, thus ushering in the thing that no one wants to talk about:

"The Great Depression II: The Revenge"
Opening REALLY soon in theatres REALLY near you

The season of Auto-Responders has begun.

There are certain times during the year in which the people of the White City are suddenly and inexplicably unavailable. Between Christmas and New Year is a flexible gap of weeks in which people phase in and out of our space-time continuum. Then we are all here until May when the Easter-May Day vortex consumes a good 30% of our acquaintances.

At the moment, the remnants of the citizenry who are in Belgrade are hiding from the sun. Meetings get put off, people on the other end of the phone sound like they just woke up from an afternoon nap (even in the morning), "lunches," which already begin late as far as my hunger cycles are concerned, begin to drift more and more toward the evening.

The fat lady has now sung.

Far from being a reference to Portugal (whose song I thought was lovely by the way), the moment of reflection is now descending on Belgrade. Eurovision has come, exploded, and drifted off in the direction of Moscow. And the question which I am left with is what does it all mean?

The hype of this watershed event for Serbia and Belgrade has already been subsumed in the day-to-day guesswork about the next government. The organization of Eurovision in Belgrade seems to have been superb. The flooding of the White City streets with thousands of visitors caused no problems around town, the atmosphere was lively, and no ugly incidents (usually to be expected with so many bodies in one space) were splashed across the headlines.