Frank: "Recently, I was honored to be selected as a judge at a chili cook-off. The original person called in sick at the last moment and I happened to be standing there at the judge's table 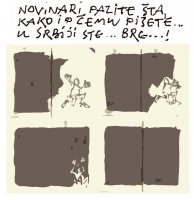