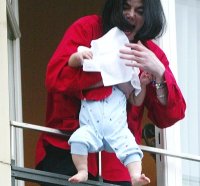 We are indeed kind and caring people. Aren't we?

We mourn the sad tragedy of the passing of Michael Jackson at ago 50. We celebrate the man who was a star from early childhood, an icon in the 1980s, the King of Pop, and we kindly and gently pass over the child molester, the depraved sociopath, the one who dangled his child out of a London hotel window, the one who attempted to surgically alter his skin color making him look like more like a live-action cartoon character than a human being.

Who are we kidding?

The hypocrisy of the death of icons - and here I know that I am going to raise a number of hackles - has us lionize people who had spectacular lives, or perhaps who actually DID do a few wonderful things while living a less than model existence the rest of the time. Elvis died of an overdose. John F. Kennedy was certainly not the best US president in history. Jim Morrison. Kurt Cobaine. John Lennon. Heroes all, of course.

While they were alive (unless we were jumping up and down as screaming fans) we deplored their behavior. We were shocked at their antics. We probably all secretly envied their shared ability to lead lives beyond the rules. By their own rules. Never mind that the rest of us would be locked up and shut down in ignominy should we have transgressed the least of our rules.

Of course, we are all saddened by the death of anyone. We feel the impact most painfully when it is someone we know, and by the magic of the media, we feel that we somehow KNOW celebrities, that they are a part of our lives. We look at Michael Jackson and remark about how young he was to die. But, if I am honest with myself, I was amazed more to find out that he was still alive when I found out he was dead. It is a miracle to me that someone who lived the way he did was able to keep himself breathing even until the age of 50.

To any fans of Michael Jackson (and I was one as well, back in the day), my apologies. But I must lodge this as my objection to canonize someone who was able to buy himself out of a life-sentence for abuse of children. Among other things.