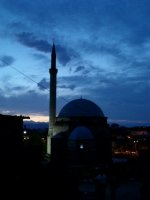 Fit neatly between Columbus Day and Halloween, this past week was unofficially declared Islamo-Fascism Awareness Week – a week of “national efforts to oppose the lies [of the academic left] and to rally American students to defend their country”against the threat of Islam.

In an unlikely blend of Red Scare themes and civil rights movement tactics, students on college campuses across America were encouraged to hold sit-ins, canvas their schools with fliers like these, and attend lectures by the likes of Ann Coulter and Rick Santorum.

The week, intended to draw attention to the threat posed by Muslim jihad to the American way of life, has also proved a celebration of anti-Islamism, anti-feminism, anti-Semitism, and right winged Christian conservativism. But as I myself am no longer a member of any college community, I figured I’d easily be able steer clear of the whole thing.

Then midweek I decided to attend a conference on the status of Kosovo held by the Lord Byron Foundation for Balkan Studies and the American Council for Kosovo – the prior, a poetically named front organization for Serb nationalist publications; the latter, an advocacy branch of the Serbian National Council on Kosovo and Metohija.

Given the respective hosts, I did not anticipate the occasion to be one of ranging perspectives or balanced debate. But after hearing so much talk on the matter last year in Belgrade, I was curious to see what form this dialogue would take on American soil.

I also assumed that, this being a conference on a small South Eastern European province, I would not find myself audience to the Al Qaeda, jihad, and global terror themes of this week's Islamo-Fascism Awareness raising. On this front, I was wrong.

As was often the case in Belgrade, this Kosovo discussion was no debate, but rather a gathering of likeminded individuals listing the reasons why they are right and why the absent voice of dissent is wrong. But here in DC, in the East Capitol Hill Club (a traditional Republican hangout), the anti-independence argument took on a strange apocalyptic, war-on-terror form, latent with the preachy quality and patronizing tone of an evangelical minister.

The discussion’s panel was chaired by Cliff Kincaid, a right-wing commentator and UN “watcher” whose most concrete complaint against the United Nations, a body that produces almost daily material for criticism, lay in its founding connections to Alger Hiss.

Setting the tone for the remainder of the discussion, Kincaid – a burly man, red in the face with helmet-like hair – spoke with a confidence grounded more in his own inflated sense of self-worth than in any matter of substance. And, as would be the case for most of the panel, he addressed Kosovo only as a starting point for a speech guided by his own personal agenda. Kincaid’s assessment of the Kosovo crisis: “The ultimate target is Israel.”

Following Kincaid’s foreboding introduction, the first panelist to speak was Professor John Schindler from the Naval War College. Like Kincaid, he cut right to the chase, immediately linking Bosnian Muslims to Al Qaeda and the global jihad. He argued that the war in Bosnia was merely a case of the Islamic world exploiting one more unstable region in efforts to break down the West. At the end he did rattle off a few lines about how he predicts a partitioned Kosovo and supports the unification of Serbia and the Republika Srpska, but then quickly moved on to explain that, unfortunately, his publisher didn’t send him the copies he requested of his recent book: Unholy Terror: Bosnia, Al-Qaeda and the Rise of Global Jihad. (Side note: Schindler’s book shares its title with an album released by the American death metal band W.A.S.P..)

David Binder, the second panelist and former New York Times correspondent to Yugoslavia, did not paint a pretty picture of Kosovo’s future, but at least he deviated from the Islamo-Fascism theme that had bulldozed its way into the Kosovo debate so far. Binder warned that an independent Kosovo was likely to falter on its own, economically and politically. As proof, he cited the grave state of Kosovo’s demographics, its heavy reliance on remissions, and its underground crime rings with connections to local authorities, UNMIK, KFOR, and the NGO scene. And in a moment counter to the sentiments of that morning, Binder lamented the fact that no one present at this conference spoke Albanian, let alone represented an Albanian perspective.

But if Binder was a step forward from the Muslim-world conspiracies of Professor Schindler, the final panelist, Bill Warner from the Center for the Study of Political Islam, was a giant leap backward. After what amounted to little more than a passing reference to Kosovo and Serbia, Warner launched into an us-versus-them lecture with us as “the modern person” of “a civilization based on the golden rule” and them as the Muslims who, apparently, are entirely at fault for this irreparable clash of civilizations. And to this discussion of jihad and global-terror, Warner brought only the simple language and exaggerated mannerism of a televangelist. As though believing clarification of his argument would come through repetition, he told us again and again that in the eyes of Muslims we are merely kafirs (non-believers) or, at best, dhimmis (kafirs protected by Muslims), and that we are all being lulled into a false sense of security when we talk of Muslims as anything but the enemy. Warner’s conclusion on the matter: be it in Kosovo or in Timbuktu, Muslims want to kill us all, so we should kill them first.

As I sat and listened to Kincaid make cracks at the UN, to Schindler rattle on about Al Qaeda hangouts, and to Warner bark out “kafir” and “dhimmi,” I began to wonder who these men were and what they were doing at a conference on Kosovo. They weren’t Serbian Nationalists – the deluded defenders of the Motherland and Serbian soil. In fact, only two of the four speakers made any reference to actual visits to the region. The best I could come up with is that they are simply opportunists, willing to stretch the religious aspect of the Kosovo situation to fit the attention-grabbing, Islam-fearing themes of the day.

The panel was followed by lunch and a brief address from members of the Congressional Serbian Caucus who, with the smooth superficiality of American politicians, made it perfectly clear how little this whole issue matters to them and to the American government.

Democrat Melissa Bean told the audience that few in Congress knew much about the issue, but that she, as a Serbian American, hoped to change that. Then before concluding, she, almost as a condolence for the government’s lack of knowledge, made reference to her American husband and his newly acquired ability to “roll a really good sarma.”

Then Republican Dan Burton, a.k.a. Indiana Dan, took the mic. “Kosovo has always been a part of Greater Serbia,” he said, clearly confident in how little his pandering and extreme remarks would matter in this country. He then went on to absolve the American government of any and all responsibility in the matter, explaining that, “the Serbs and the Kosovars need to sit down at the conference table and work this out.” In his mind, the issue would be best solved "not in the halls of Congress, but by the people over there."

What a novel idea – too bad he didn’t come up such insight before voting for the war in Iraq.

In the end, the entire production proved little more than an exercise in frivolity. I left the conference no better informed on the Kosovo issue, yet all the more aware that no matter the topic at hand, politicians will always be politicians and pompous pseudo-experts will always be willing to give lip service to a marginal issue in exchange for an audience willing to listen to their apocalyptic rants and shameless self promotion.

But, hey, at least I got free lunch.