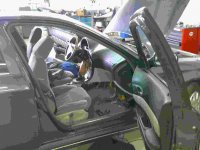 Where's the swich?
Having now invested a significant amount of cash into the Delta Money Pit (this is the technical term for the garage where my perfectly operating car has been transformed into a terminal patient), I am now investing my time.

Yesterday, as a kind of joke, I was informed that my car was "ready" to pick up. Two weeks ago I had stupidly brought it here to have a check-up – oil, filters, and yada, yada, yada. I should have immediately seen the sodomy in their eyes when they said I had to leave the car for two days even to get an estimate.

It turns out that my motor was slightly dirty and therefore would have to be replaced – naturally no one at the DMP would ever dream of fixing a part that could be ordered from far off Italy, shipped by a horse cart, and used to extort the equivalent of the Argentine national debt from me.

The best part of all this is what comes now: I said, "Ok!"

For them, this might have been an even better response than merely dropping my trousers and bending over. As it happens, I had consented to this for the whole company, in perpetuity, whenever the spirit moves them.

14 days and thousands of euros later, I sit outside the garage watching the Experts attempting to turn off my rear passenger lights. I am now into the fourth hour of my vigil. It appears that while they were replacing every moving part of my poor car, one of the mechanics was hungry and began chewing on some exposed electrical cable.

At this stage, I can no longer leave. I am utterly committed to watching on as they tear the guts out of my car in the bootless search for the custom-made sabotage of the under-fed mechanic. I have passed blithely from anger to rage, from rage to righteous fury, from righteous fury to melancholy, and from melancholy to cynicism, and I am currently cultivating Rye and Amused Detachment. This last, if I can sustain it, is probably best for my cardiac longevity.

(And since my heart is no longer under guarantee, I should be wary of someone here ordering a replacement...)

And now here I sit, on location, with plenty of time to write this blog on my phone. I mention as a by-the-way that, while writing this, I managed to drop the phone and crack the display (another Customer Service blog may be expected soon when they will want to mail my phone to Helsinki to fix it).

Hour Five is beginning now. I came to the doctor for a runny nose, was given brain surgery, and found that they broke my toe during the operation. In watching them trying to find the problem for five hours, my trust in the rest of the million-dollar job has been somewhat destabilized.

Dear Reader, I am low on batteries, patience, and cigarettes by now. The Alfa Romeo now lies prone and dismembered on the garage floor. And I have no idea how and in what way Humpty-Dumpty will be reanimated.

I close this chapter inconclusively and hope that when archeologists find my remains here that they might unravel this mystery to a more satisfying end.

And that rear lights will have been turned off.