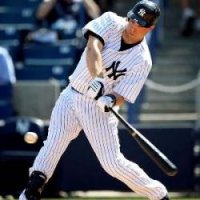 When the umpire shouts "Play Ball!" at the beginning of the game, the players react by standing still. Nine guys waiting to bat. Nine guys standing ready in the field. A lot of standing.

The World Series of Baseball is underway between the 2008 champion Philadelphia Philies and the 26-series winning New York Yankees. And while I do not think I am the only one in Serbia to be watching the Series, the club seems to be rather small...

On the surface, there do not seem to be a lot of reasons for anyone to watch baseball. The game is long - there are no timed innings or quarters or halves. In theory, a game can be continued in perpetuity if the score stays within a point (the record for one game is eight hours and 25 minutes, set in 1981). While playing, most of the action happens between the pitcher and the batter and rarely more than four of the guys in the field have to bestir themselves at one time. As to the batting team, they spend their time sitting in the dugout, chewing tobacco (or gum or something that makes them spit all the time), and waiting for a chance to face the pitcher on the mound.

The players - since they do not move too much in actual play - can be fat and old. Some are in their forties. Most of the guys are in fairly good shape to look at them, but just the possibility that you do not have to be retired from the sport at age 23 is a beacon of hope for old guys like me watching at home. It may be argued that the fans actually get more exercise than the players - every now and then we have to get up for more beer.

It must be said that I have never been a fan. It is a sport which I know since childhood. I know the rules, but I have no idea how I learned them. It seems they were somehow infused into me. Like most people, I also have a hard time explaining the rules to anyone who does not know the sport. It is like explaining how to walk or to breathe. I have never been to a live game. I have watched only a handful in my life on television (including these past nights). I played as a child but stopped over thirty years ago.

But I am drawn to baseball. I like the familiar jargon, the stances, the ever-present potential of a good play. In Game 2 of the Series, Philies pitcher Cliff Lee caught a line drive up the center behind his back and tossed it to first for the double play. We waited all night for that one spectacular sequence. When I say "we," I mean "I."

The language of baseball is, on the other hand, scattered throughout American English. We talk about pitches, strikeouts, three strikes, homeruns, foul balls, a ballpark estimate, batting 1000, covering your bases, sitting the catbird seat, throwing a curve ball, fast ball, hard ball. A Grand Slam comes from baseball, and so does something coming out of left field. And when the situation suddenly changes, we say it's a whole new ball game.

Famous Yankee manager Yogi Berra gave us the saying that "it ain't over ‘til the fat lady sings" or "it ain't over ‘til it's over." He also said that in baseball "90 percent of the game is half mental," and once gave the advice: "When you come to a fork in the road, take it." There are six books of his sayings, even if the "fat lady" thing is disputed.

So little of a true fan that I am, I only just learned now that Serbia has a national baseball team and that there is a diamond in Ada. A true baseball diehard would have made a point of knowing this...

Baseball, whether I am a fan or not, whether by choice or not, has been allotted and holds fiercely to a certain number of my twilighting neurons. Despite the technical difficulty of the infield-fly rule, the designated hitter rule, knowing a player's batting average, RBI, ERA, and other arcane statistics, I still find that I like to watch it.

This evening, the night of Halloween and Game 3 of the World Series - two occasions which have little relevance to Serbia - I will be paying rapt attention to eighteen guys just standing around.