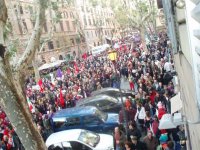 Italian people are at their best in a piazza.  Yesterday, the international "No B day" was held all over the world, in public squares.  The largest event happened in Rome in Piazza San Giovanni. For those few who don't understand,  No B means No Berlusconi , the right winged  Italian prime minister who has been ruling Italy for the past two decades,  undermining its brightest democratic traditions with his private and public scandals.

Only a couple of days ago, a protected mafia witness testified that Berlusconi was involved in mafia crimes.  This latest allegation among many triggered many protestors to carry the banners: no mafia in the state. However, the real hero of this manifestation was Berlusconi' s ex wife, who a year or so ago denounced him as womanizer and a corruptor.

The organizers claim that they were  one million in the Rome march, which ended in a big piazza where non politicians addressed the crowds. This country has too many parties without people and too much people without a party, said one of the participants.

The  "No Berlusconi" day was organized via internet, without political parties or partisan movements. The people on the streets were dressed in purple as a sign of protest, with many masques and disguises. The king of commedia dell arte, Dario Fo (with his partner Franca Rame), the Nobel prize winner for literature, spoke from the stage to the people: witty and poignant as usual. This author won the Nobel for his political improvised tragic comedies on the mafia state, which has a long bloody history in democratic Italy.

In the meantime Berlusconi, living in denial as usual, was on a fast track train between Milan and Turin, triumphantly opening the route that will join the two power centers in northern Italy.  Riot police were all over the streets in Torino because of the soccer derby between Milan and Turin team and the voyage of its problematic president.

In  many other cities of the world, like Berlin or Sydney,  people gathered to protest against Berlusconi. These days, as in the days of Borgia or Caligula,  Italy generates news for its mafia and sex scandals, not from a squalid underclass but from the very top.   The people have to stand up in the piazza risking their lives for democracy, so dear to their hearts and temper.  But yesterday, nobody  dead, nobody hurt, just a great carnival of political alternative: a good start.