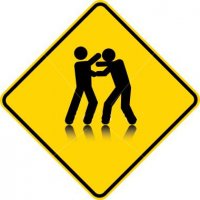 What makes us want to punch each other?

This morning, leaving my home, there was a guy who wanted to take my parking space. But he decided to wait for it in such a way as I could not easily get out of it. I signaled him to move and he inched away - it was enough for me to pass but I had to do six maneuvers to get by without hitting him.

I signaled again for him to move. This time the response was to open the window and ask me angrily what I wanted. The position he chose was immediately aggressive. He was ready to fight. I declined.

A couple of weeks ago, I witnessed a man who came looking for a fight with someone out of Heroism: he came to defend the honor of his girlfriend. But instead of letting his words talk, he moved immediately to violence. A fight ensued. Blood was drawn. The police were called.

We are aggressive people. The incident above did not involve me, but I have felt the same kind of rage from time to time in my life. Many have. But the question I have is when does it become acceptable to cross the line between civilized behavior, even if angry, and unchecked violence and aggression?

If you watch television or films, or (and perhaps worse still) television films, you are likely to see several people being punched in the face or fighting in the course of a day. When I was younger, I remember that it always the Bad Guy who did the punching and the Good Guy would defend himself.

And he would usually win.

But in today's imagery, we are more likely to see the perceived Good Guy lose his temper and start the fight. We are being trained and conditioned to react violently and aggressively. If not, we are seen as cowardly or as weak.

I teach my son to avoid fights in school. I try to show him that words are as effective. That people who want to resort to shoving matches are the ones who have run out of words to say what they feel, to control themselves, and to solve their own problems. I do not mean, by this, that he should be the quickest and cleverest in doing the dozens. I don't think having the better (or louder) insult ready is the solution. I want him to disarm aggression before it becomes violent.

Have I, in counseling this, left him an easy target to school bullies?

This is my greatest fear. The fact is that aggression has become an acceptable standard. Begin talking about violence and aggression and you will soon find everyone around you has a few stories - some of them will be understandable, some will turn your insides out.

Most people who get into fights will protest that they had no choice or that it was not their fault. These are rationalizations. We do not always like the choices, but we always have them. And a real fight involves at least two participants: how can we not take our own share of the responsibility? But we offer these rationalizations, I think, because we secretly know that resorting to violence is a failure of civilized behavior.

Even if it is glamorized in the movies.