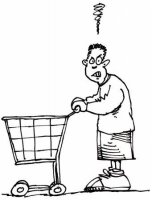 So there I was at Cartier, Rue de la Paix 11, in Paris. I asked the guy to show me what he had in watches for around four million euros. He assessed me with a glance (jeans, Indian kurta shirt, sneakers) and he said, "We have none. I am going to go eat my lunch."

They were Nike sneakers by the way. Originals.

His judgment was that I was not of a sufficient seriousness or stature to look at his precious merchandise. Generally speaking, when someone comes into a shop and wants to see something in a specific price range, he's a BUYER. If he were a Browser (O! Hated Species!), he would probably just shuffle around the gold-threaded carpeting and head off quickly. But here, I was cast off because I was not worthy of his time.

Naturally this was a cause of annoyance for me.

However, it was not REALLY Cartier in Paris. Nor was it a watch I was looking for. In fact I was in the White City on the Danube, at Zeleni Pijac, trying to buy a watch band (price: RSD 200). I came over to the stand and was looking through the watch bands. The lady behind the table said, "What-do-you-want," as usual, although the tone rather seemed to tell me to go to hell. And I said: I want pizza, can't you see? That's why I am looking at your watch bands!

But then out loud I said... that I needed a watch-band for this watch (removes watch and shows her). She takes it, looks at it, examines it, and then says: I don't work here, ask my husband.  Privately, I am getting a bad feeling about all this. She called to the husband who was very busily occupied in a nasal excavation project in the adjacent stall.

He digs for a second. I dig with him. I showed him one I liked, and he threw down four in a huff and said, "NEMA. And I am going to eat my lunch."

I am still not certain as to what offense I gave, but he stormed away as if my intention to plunk down only 200 dinars was not worthy of his time. I wondered what he could possibly expect from me. He only sells watch bands. Should I have asked to buy 1,000 bands?

Once again, I was left disgruntled by retail. My crazy theory about retail is that if you are selling, your main goal is to sell. But it seems that I am wrong. The main goal of many shopkeepers and retailers is to be left alone. A customer, like me for example, should come in to a shop and excuse himself for disturbing the people there. He should know precisely what he wants beforehand. No browsing. No "just looking."

Most of the time, if you do know what you want, you REALLY have to want it badly because the first response is always "nema." Then you have to explain how you need it a lot and that it looks a little like this and has these functions. Then they will sigh heavily, drop their shoulders, and condescend to reach over to their left and get the thing you want.

This is the retail power play. They need to establish dominion of the customer so he feels obliged to take something - maybe not even what he wants - just to cover the offense of daring to walk into the shop. If the shopkeeper starts pandering to the whims of customers, it will never end! Sure, he will probably sell more and get repeat business. But he will lose the upper hand.

In fairness, of course every place is not like this. In some they will ignore you. In some they will stay on the phone until you get tired and leave. In Paris (not rue de la Paix but rue de Sèvres), I remember standing in line at a bakery, a line that stretched all the way out into the street, while the two behind the counter were just chit-chatting together. After five minutes or so, one turned to us and said: next?

I have decided on a five-point strategy that seems to allow me to get through my longish shopping list.

2. If you have to ask, make it negative: "You probably don''t have any toothbrushes, do you?"

3. Gather as much stuff as you can in your basket BEFORE asking anything, so they see you are serious.

4. Dress up for shopping.

5. Make friends with the shopkeeper - sympathize about the heat, inflation, the trees on Bulevar, the highway works in progress... Then spring your question. Maybe show pictures of your kids.

This will not work every time, Dear Readers, and it requires a lot of practice as well as reversing Normal Attitudes to shopping, but it can help.

Now I am just off to the kiosk to beg and cajole the guy for a newspaper.