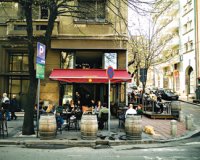 We are not bears.

Unlike bears, we do not sleep through the winter months. Unless watching parliament on RTS counts. But now, as the weather begins to warm, we awaken like the bears from a state of hibernation. We take to the streets. We wear brighter colors, fewer layers, we check each other out. Eyes open.

During the winter, we stayed inside, kept more to ourselves, and burned lights in the house longer. We watched television, surfed the Internet, and (shockingly) read a lot of books. But that is all over now. Now we venture out of our caves and see what the rest of the tribe is doing with the newly returned sunshine and warmth in the White City.

Walking through the city yesterday, I took a few notes. I saw men sitting on the street playing a game of chess on a folding table. And a crowd had gathered round them. There was even one photographer. The two combatants sat facing each other with looks of grim determination on their faces. The spectators - and let's not exaggerate, there were about ten people - all leaned over the wooden table with rapt interest. This was not speed chess (especially since the players were septuagenarians and moving only as quickly as the laws of physics allowed): each move appeared carefully calculated and weighed and pondered. The crowd held its breath, made discrete comments.

One went to get coffee for everyone.

This action was observed as I walked along Makedonska toward the center. Knez Mihajlova was also abuzz and awash with awakened humanity. Short skirts had returned and drew the eyes of most of the male pedestrians, either furtively or notoriously, as they weaved their way along the street and causing a wave of turning heads and bumping into other people.

The sidewalk cafes, always full no matter what time of year in defiance of working hours and demographics (I still do not see how this city supports SO MANY cafes even if I do not complain of it), were full to bursting with people sitting in the new sun. Couples facing outward and watching the world go by, groups of friends hunched over a table meant for two occupants, the occasional person sitting alone with a book or a newspaper.

But the major occupation of the sitters and sippers and sunbathers seemed to be the Cross Check. I could clearly see the analysis of the spring outfits, the passing legs, beginning around the tables. Eyes dart everywhere in the spring. We look for people we know. We look for people we recognize. There is clearly a large swathe of the population that does not experience the cold and snow in Belgrade, only coming out when the sun does. There is another segment of the city that is determined to be spring-like even if it is not frankly too warm - I watched a number of people in short-sleeved shirts, mini-skirts, and even a pair of shorts walking around and trying to look comfortable in the Cross Check, but in reality (once they thought no eyes were on them) shivered in the cold winds.

And then there is the infamous Strahinica Bana. I made my way down there in the mid-afternoon and settled in Pastis as an observation point. The thing which struck me most there were the people who seemed to be sitting together but were in fact sitting with their mobile phones. The occurrence of people checking their Facebook pages (or whatever they were checking) was significantly higher than people looking at each other....

The conclusion - is any applies - seems to be that we are not quite ready for the spring Cross Check yet. We take advantage of the sun by bringing our indoor activities outside. In a few weeks, we will adjust to the new season by beginning to complain about the oppressive heat. We will leave our phones in bags and pockets, and we will choose the shade over the sun.

In the meantime, however, I have to run outside now and catch the exciting finale of yesterday's chess match.