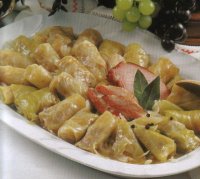 When hunger does not do the trick, let's eat then.

After a week of undue media attention - and, yes, ok, I am part of it regrettably - Toma has come back to the dinner table, seeing that no one else was going to show up at the negotiating table. The spin seems to be that he has called attention to the need for Serbia to move forward. On to the main course, as it were...

A week earlier, Toma was ready to starve himself to death rather than not get early elections. This week, after the tempting paschal aromas of sarma and proja and pasulj prebranac wafted into his hospital room, he substituted "moving forward" for "early elections" as a good reason to stop the hunger strike. Philosophers and theologians alike agree that that mankind tends to move forward no matter what stupid things we do; so the new endgame seems ok.

Given that many people were nearing the end of their quadragesimal fasting last week, the timing seems pretty good. I am surprised the Patriarch did not see it that way.

I have to admit that I am a little disappointed in the denouement of this gastronomic drama. I had expected that Toma might hold on a little longer than eight days and really make his opponents shift uncomfortably in their seats over the Easter feast. Instead, he just gave up.

Life is less interesting than fiction. And please pass the proja.