A time for losers

‬Queen has a verse in their famous song "We are the Champions" that usually doesn't catch the ears of those listening‪: "No time for losers"

‬Recent events in big cities in England have me wondering if the losers have finally decided to take things into their own hands and make their‪ "own time"?

‬Today, it is more important than ever to win, not only to participate. The time when the modern Olympic movement was created (promoting‪ ("‬it is important to participate‪"), ‬the time of heroism and ideals, these times have long since gone. Today, it is most important to be better than the competition, to be at the top, to find a way to reach the top without regard for the methods used. If you are not exceptional, then you are not a winner. Consequently, you are a loser, and, as the song says, there is no room for losers.‪

‬Twice in the last six years I participated in large Scout events in Essex, not far from London. In intense contact with the local Scouts, I found that their semantic use of language set extremely high standards. Everything was extraordinary, unrepeatable, phenomenal… I didn't like it. In my language and culture, ‪"goood"‬is used for quite well done job. For‪ "very goood" and "‬exceptional‪" ‬you need to work very, very, very hard‪.

‬We started writing down those words and joking that if you want to say something in ‘good’ local English, you must use at least couple of such attributes in every sentence. Luckily, there are so many to choose from‪:

‬I spoke with my friends and told them about this observation and the resultant high pressure this puts on young people and the cruel game the play in which they have to be the best.‪

‬I like to photograph. Whenever I raised my camera, kids tried to be as crazy as possible - this was the way to be spotted and so maybe show up in a photo that will be seen around the world.‪

‬Even The Scout Association seem to be knee-deep in this game; if they didn’t play, they would be completely marginalised.‪ ‬The pressure this creates is extreme, especially for young people - Generation Y, as those born between 1977 and 1994 are called. British Prime Minister David Cameron even said that the youngest rioter was only 11 years old - the one from the next generation - Generation Z!‪

‬How many of us can be winners? My simple estimation is that no more than 5% of us are ‘very successful’. Quite simply, it is not possible that everyone is the best. That means that 95% of us are losers, those who are not on top, those who have to be satisfied with the leftovers of life. That is too many. That projects a strong feeling of helplessness and drives young people into apathy and hopelessness, into Saturday-night drinking parties, holidays in the sun with orgies and violence that was recently present only at football games but has now come out into the streets.‪

‬Laurie Penny, a journalist living in London,‪ ‬blogged couple of nights ago .‪ ‬A couple of things caught my attention.‪

‬Angry young people with nothing to do and little to lose are turning on their own communities, and they cannot be stopped, and they know it. Tonight, in one of the greatest cities in the world, society is ripping itself apart.‪

‬People riot because they have spent their whole lives being told that they are good for nothing, and they realise that together they can do anything – literally, anything at all. People to whom respect has never been shown riot because they feel they have little reason to show respect themselves.‪

‬After decades of being ignored and marginalised and harassed by the police, after months of seeing any conceivable hope of a better future confiscated, they are finally on the news. In one NBC report, a young man in Tottenham was asked if rioting really achieved anything: "Yes," said the young man. "You wouldn't be talking to me now if we didn't riot, would you?" "Two months ago we marched to Scotland Yard, more than 2,000 of us, all blacks, and it was peaceful and calm and you know what? Not a word in the press. Last night a bit of rioting and looting and look around you."‪

‬All night the question from BBC and Sky reporters has been "Why has this happened?" when really it should be "How did this not happen sooner?"‪

For a baby-boomer, who grew on "imagine all the people...", it is hard to accept that there is "no time for losers" and that all has to be "super awesome". My peers, especially those who run countries, should maybe think about this. The message they got last week was very clear. 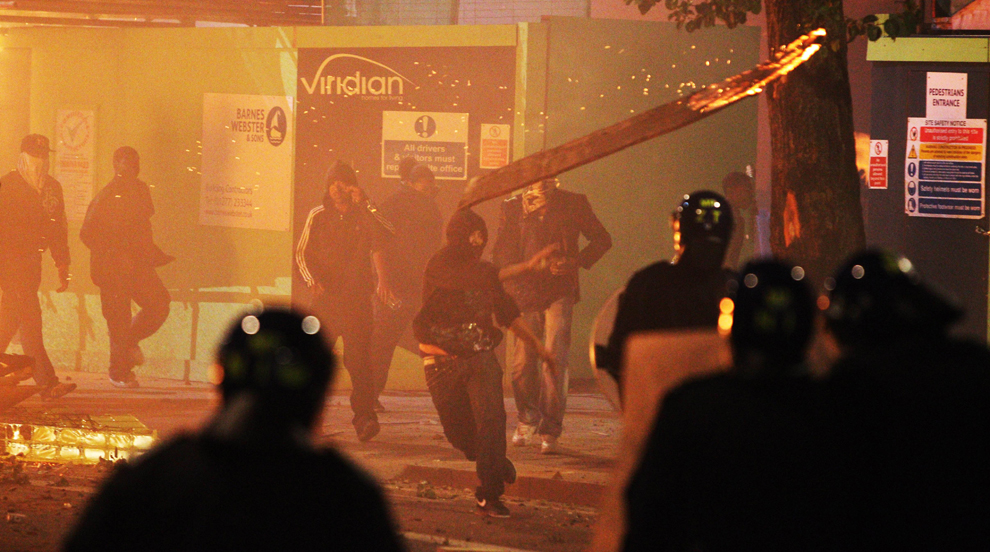 PS2 - See my friend Mary Murphy having a point on language used in her speach at IgniteBp3, Cotton Club, Budapest, Hungary