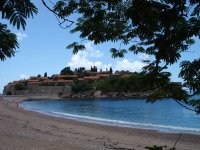 The Montenegrin shore.
In the context of Europe, the Balkan Peninsula has traditionally been reputed as a land of beautifully mysterious landscapes, poor transportation and dangerously passionate people, all of which contribute to the centuries-old perception of the region as the backward, uncivilized corner of Europe. But even the Balkans has its Balkans, and when the context is narrowed to this region only, Montenegro becomes the new proverbial armpit.

One could easily argue that Kosovo with its ethnic divides and instability is more deserving of the title “the Balkans of the Balkans,” but while Kosovo has been swamped by the international community and completely divided from the rest of the region by a longstanding wall of ignorance, Montenegro has figuratively played the role of the thick-headed younger brother, left behind in the village to live by the land and age old traditions while the rest trade in pitchforks for pens.

A friend of mine, during a conversation about the lingering patriarchal nature of some aspects of Serbian society, explained to me that though today’s Serbia still has its gender inequalities, it’s nothing compared to Montenegro where, despite gender-blind inheritance laws, women are scorned if they even try to claim a portion of a deceased parent’s assets when a brother can claim it in her place.

I have also been privy to fantastic stories about Montenegrins and their approach to regional drug smuggling. As a demonstration of their outlandish smuggling genius, rooted in an agrarian mentality, I was told, for example, that Montenegrins avoid problems at the border by loading donkeys with their contraband of choice and sending them off down footpaths through the uninhabited mountains between Serbia and Montenegro. Either the donkey turns around, in which case nothing is lost, or it continues down the path, crosses the border undisturbed, and is met on the other side by the Serbian end of the drug ring. 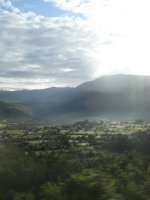 Morning view from the train.

And while the truth behind these stories is clearly debatable, my roommate’s reminder of the hardship suffered by the Serbs who retreated through Montenegro’s treacherous mountain passes is not. After returning from my trip to Kosovo, I mentioned to her the stunning absence of civilization in the Montenegrin mountains I passed through en route from Peć to Novi Pazar. Eyebrows raised, she responded, “Maybe they were beautiful from your bus window, but they were anything but for the Serbs fleeing to the sea in retreat during the First World War.”

This motif of Montenegro as the most balkan of the Balkans is longstanding. British writer Rebecca West, in Black Lamb Grey Falcon, the massive travelogue of her journey throughout the Kingdom of Yugoslavia in 1937, shows Montenegro and Montenegrins no mercy. Throughout the more than 1,100 page account, she rests her observations on a scheme of national character already well entrenched in the region. The Croats are too intellectual for their own good, the Serbs are power hungry yet too lazy to maintain real authority, the Bosnians are sensually mysterious in their shroud of Islam and the Montenegrins, the most dangerously flawed of all, are heroic to a fault and the least human for it.

Entering Montenegro from Kosovo, West eloquently describes the land as “enjoying elemental innocence,” but then parallels her description of the land’s awing simplicity in her portrayal of its people, calling the Montenegrins “marvelously beautiful people, placid as prize animals.” She later quotes her Serbian guide who describes Montenegrins as “empty-headed except for their wild and unthinking heroism,” and the country as “a sacrifice to itself of itself.” West then goes on to tell a story supportive of this observation in which their Montenegrin driver comes harrowingly close to leading her, her husband and himself to certain death over a steep cliff rather than admitting he had taken a wrong turn on the way to a small mountain lake.

Perhaps to a fault, I have always held an intense skepticism for such generalizations about national character, so with this mountain of stories and my reactionary denial of their intended message, I boarded the night train from Belgrade to Bar.

The train ride itself was an immediate taste of the transportation conditions awaiting me throughout Montenegro: poorly maintained, as only half the sleeping car space was in operation and the dinning car appeared little more than an undusted time capsule preserving the feigned utilitarianism of Yugoslavia’s socialist years, but also host to absolutely breathtaking views as the train runs high on the mountainside, revealing the beautiful green valleys and riverbeds below.

I arrived at Bar mid morning and was met by the sunlit blue-green of Montenegro’s coastline. Befitting of the tourist niche the Montenegrin coast has carved out for itself, the towns lining the sea from Bar to Herceg Novi were a far cry from the wilds of West’s account or the treacherous mountains, host to the death of thousands back in 1915. 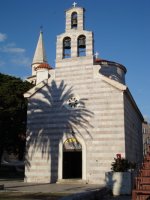 More than any site of historical significance in Serbia, the old cities of Budva and Kotor shone with fresh upkeep as they awaited the arrival of the French, German, and Italian tourists who would occasionally stream off their Adriatic cruise ships.

Further inland, however, proved a different story altogether. If the view from the high narrow road that winds from the sea to the mountain town of Cetinje took my breath away, the daring moves of our bus driver knocked the wind out of me. While winding round a narrow, un-railed, hairpin turn, the driver blindly passed a small car and a bus much larger then our own. Wild yes, but if you’ve ever taken the Chinatown bus between Boston and New York, you’ll know that such daring moves are certainly not limited to Montenegrin drivers.

As the bus began its descent into Podgorica, the capital once known as Titograd, it was readily apparent that to enter this city was not only to descend from the heights of the surrounding mountains but also from the higher living standard found along the coast.

Podgorica, though Montenegro’s capital, bears a far closer resemblance to Serbia’s Niš than to its Belgrade. Podgorica’s small town center does bear the markings of some recent revitalization and individual investment, but its pedestrian street, now lined with sleek new street lamps, proves a striking contrast to the rest of the town’s dusty roads, darkened by this region's post-socialist hallmark: rows of decaying concrete apartment buildings, uniform in their cramped spaces and their absence of color.

In the center of the city I passed a man covered from head to foot in a thin layer of dirt who carried a long handled scythe over his shoulder. This man, displaced in his semi-urban surroundings, appeared to me as the personification of what had, till then, seemed merely a metaphor - the simple younger brother left to village life while the rest traded pitchforks for pens.

Just as my time here has left me no closer to knowing where to come down on the existence of a “Balkan mentality,” my brief trip to Montenegro left me no better prepared either to accept its reputation as wildly untamed or to stand by my original skepticism.

And while I do not believe a second visit will clear up matters further, I certainly intend to make one, for Montenegro, wild or not, is a beautiful, beautiful country.