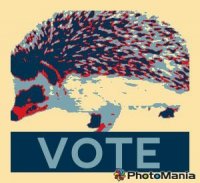 Wait until after the elections, they all said.

The implication of this cryptic phrase is that after the elections in Serbia, people will be able to make decisions and everything will get back to business as usual. So we sat through the "campaign" and through election day and night, and patiently awaited the great Results which would shape the future.

It seems we never really have to look very far in the search for an excuse NOT to do stuff. If there are new projects to start, new investments to make, and new initiatives to kick-off, it is always better to wait until the NEXT BIG THING passes before making any moves or calling any audibles.

This is not about elections. The elections, however, provide the single greatest impediment to working. The elections provide enormous blocks of time in which we may stall. The first period begins at the beginning of election year, at which time we wring our hands and worry about what they elections will bring. In the second period, the actual campaign begins, during which it would be unthinkable to do anything. Finally, we have elections - presidential, state, municipal, and local all in one whack - and, because the entire government comes to a halt during this period, we wait again. This brings us to today.

Today begins the Post-Election Jockeying and Horse Trading which will eventually lead to us getting a government. This can last for a very, very long time. This will be a period rife with speculation (we love speculation) and prognosticating (we adore prognosticating) while the major and minor parties court and woo and poo-poo and brush off each other in the complicated Coalition Dance-a-Thon.

"Hello, you have reached the Republic of Serbia. No one is here right now. Please hold. Your call is very important to us."

There is a marked lack of suspense in this waiting. All the parties and politicians have more or less sung from a single hymn book. The subtleties which determine who will run the Interior, Foreign Affairs, and the Economy will NOT be hugely different, one from the next. Just the old familiar names with new business cards.

But wait, they say. We will soon know everything.

After we know everything, however, there is another period in which we will want to wait a little more. The new government will want to take a number of seemingly important Actions in its first weeks and months so that it can deliver a strong first 100 days message. During this time, we are still politicking. If my calculations are correct, this lands us somewhere between October and November before things can get back to normal.

So let's wait until after new year 2013. THEN we will know everything.