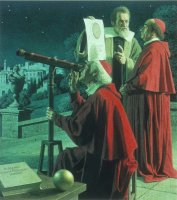 The implications of what Jorge Mario, yclept Francis, could now do as pope are mind boggling. Leaving out the obvious old chestnut of evolution, having a scientific brain at the helm of Big Religion sounds like having a free-marketeer at the helm of the old Soviet Union. And look how well that worked out for Mr. Gorbachev.

Francis (who, by the way, does not like to go by "Frank," trust me) is definitely an avian of a different pinnam. So what if he is the ninth oldest pope to be elected since 1225. He is a SCIENTIST! He questions stuff! He demands proof! I think the conclave of cardinals probably only glossed over his CV while they were serving the cappuccinos.

He could do all sorts of crazy things now. He could become fallible (the idea of infallibility is definitely less than scientific). He could rubber-stamp the God particle. But, and this is the thing that has Church wriggling uncomfortably under their miters, he could let the women in! They could become priests and bishops and cardinals and, before you know it: Pope Francine I.

But seriously though, one of the oldest, largest, most anachronistic, and richest global organizations (Vatican Corp.) has just got a scientist as its new CEO. Expectations of what he could and may and possibly will do as the new pope will weigh heavily on the Argentinean's papal shoulders.

I am not a Catholic (although I went through their boot camp) and I am no fan of Big Religion in general. But I cannot help but harbor a few hopes that Francis might actually revamp and modernize the Catholic Church to some degree.

I wonder if he watches The Big Bang Theory.