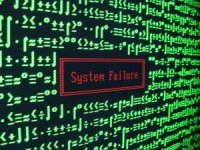 But the System is also misapplied in almost any context where people try to hide from responsibility. Waiters in restaurants, clerks in shops, mobile telephone providers, and even people in smaller groups - it is always much easier to throw up your hands and blame the System (even if there isn't one) than to say: "I screwed up. I am sorry."

If your letter gets delivered late and to the wrong address, NO ONE is responsible. The System consumes the individual and is represented as an untamable monster which does whatever it wants, whenever it wants, and to whomever it wants. Can no one stop this beast?

To my great frustration and anger, the answer is both yes and no. The Systems we are talking about are not spawned in nature but are the by-products of human thought, human design, and human hands. People create the System, and then we subordinate ourselves to it.

I have recently been spending time bemoaning the Serbian Healthcare System, talking about the lack of care, attention, and information given to patients there. It is a System wherein a human being becomes a patient, and a patient becomes an undifferentiated lump of organic matter - a mess that someone has to clean up. What I observed, to my horror, was the process of dehumanization which happens at the hands of the Healthcare System - needs that go unmet, cries that go unheard, reassurance not given, basic information not provided, and no one (just like the lost letter in the post office) is responsible for it.

But whenever I get onto the subject, I am stopped by a mass of objections. There is nothing we can do, they say. Everyone knows that it's like that, they say. It's the System, a doctor told me. And, sadly, they are right. The System, although manmade, has become so outsized and unwieldy that the efforts of one person can do precious little to change it.

My one voice will do nothing to change the System. The only thing that can change it is if people within the System, the individuals that are the moving parts of the machine, make the choice to do things differently. If the architectonic structure of the Healthcare System requires a new design, what is first needed is the will to do it. If my one voice can do anything, it is to call attention to this fact that "everybody knows" and hope that others will recognize themselves in it. And if I do not have a solution to the problem today, perhaps in time I can be part of building one.

It may be an unrealistic dream on my part, but I would rather light one small candle than curse the darkness.