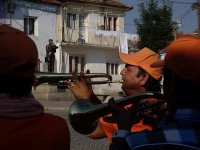 When they come, how will they look upon us?


Interestingly, after over a decade's presence here in Serbia, I begin to take things for granted which might jar the senses of a visitor to this strange planet. Now that my family from America is coming to visit, I begin to look at things through their eyes. And I wonder at the sight.

I notice things like the extremeness of shortness of short skirts. And short shorts. Although I am not displeased to notice these things on a regular basis, now I see them in terms of the possible contrast with Glendale, Arizona, or Chicago. Maybe it is the same. For their sakes, I hope so.

The predominant white European homogeneity. The invisibility of disabled persons. The falling cornices on the buildings. The superabundance of street cafes. The stark contrast of the old and less-old. The remnants of socialism. The roaming and spontaneous trubaci bands.

Landing the other day at the airport, I also began noticing the signs. We have hundreds of posters, advertisements, and signs written in AE. AE is "Approximate English," where we care enough to translate, but not enough to edit. As I looked at the ads for VIP Mobile and other various examples at the airport, I realized that the message was universally the same. Problematically this message is also incomprehensible.

Habits which have long since been assimilated will now be revisited and reexamined. The occurrence of lunch at anywhere between three and five in the afternoon may have my father's Iowa stomach growling. The provision of rakija at breakfast may also raise an eyebrow.

As a smoker, moreover, I have forgotten that public smoking is pretty much a part of Ancient American History. The fact that Serbia has variously implemented non-smoking laws and bans in public places notwithstanding, you can still smoke in almost any place where there is room enough to touch lighter to cigarette. I predict many watery eyes in the coming days.

Tone of voice is another thing that these new eyes and ears may notice. As I recall from my childhood and experience with my fellow countrymen, we tend not to raise our voices. Displeasure is expressed by inaudible sighs, an imperceptible tightening of the facial muscles, or a plethora of placatory discourse. In Belgrade, however, we express ourselves more loudly. A screaming match, complete with crying and angry shouting, may be the result of an inability to decide whose turn it is to hold the TV remote.

Ordering things in cafes. The round-about language which does not wish to inconvenience the waiter but it really would be very nice to receive a small coffee if it is not too much trouble usually results in your being completely overlooked and ignored. Waiters in America have names pinned to their chests and are falling all over themselves to help you. Waiters in Serbia, if you want to be heard, are called HEY YOU! and BOY!

When you must bark at them, and say, "BRING COFFEE!" it might feel slightly uncivilized to the unaccustomed ear.

It is an uncomfortable irony that I do not notice most of these phenomena except when paying particular attention to them. Having spent the past too-many-years railing against things which bug me about life in the White City, I now find myself on the other side of the counter, offering explanations for what they see and may not understand.

I will spend a lot of next week shrugging my shoulders I think.