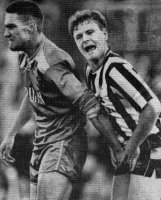 ‘That Derbyshire is a bastard.’ ‘The English should be ashamed.’ ‘I thought that the English were the one’s that invented fair play?’ These are all comments that I have read and heard recently following Serbia’s defeat at the hands of England during an Under 21 European Cup Football qualifier. Serbs evidently feel cheated by a dubious goal but why are they so angry when it happens all the time? Didn’t Serbia qualify? And top of the group? Was the game that significant? No, not really but I think the answer to all the anger is about something else entirely. It is due to a dying faith in fair play and anguish at its evident deterioration, but it is also significantly, about what Serbs consider to be the erosion of an essential ‘Englishness’.

An Englishness whose quaint tea-drinking island nation mentality and notions of fair play have found themselves at odds with the prevailing sporting philosophy of win at all costs; a philosophy from across the Atlantic pond. It’s a rather good philosophy, fair play, the trouble being that you rarely end up winning. Not that that’s the point old chap. It’s all about taking part and doing the right thing. Yes, we English do consider fair play important and we are critical of acts that just aren’t quite right, but the point is not that England has allowed itself to slip, but that England has lagged so far behind the move to ‘win at all costs’ that we are still upheld as the benchmark of fair play. And that I believe was the reason for the anger. Not because of what happened, but because it was such a shock for an Englishmen to be seen doing such a thing. That somehow we had cheated the world. That we were really like the Italians and the Portuguese after all. That Englishness had simply disappeared and we had no right to claim it as a sporting philosophy anymore. The trouble is that fair play died long ago in sport and England’s ‘dishonorable act’ is only its last nail in the fair play coffin.

The Italians had to dive to beat Australia, world cyclists are all up to their eye balls and cricket coaches are assassinated in their hotel rooms. Fair play is truly dead and has been disappearing for some time. And its not about nationality or the sport involved, but rather about the increasing commercialisation of sport and not ‘the need to win at all costs’ but ‘the need to win because of the costs’. Commercialisation has meant that teams can’t afford (literally) to miss those chances and they are told to take them whether it is fair or not. This approach has pervaded all sports and even Englishness has got a price. I’m just hoping that if we are going to pay it, which I don’t think we should, it’s going to land us a major trophy one of these days.

And coming back to the goal; wasn’t the referee the one at fault allowing the goal? I’ve seen hundreds of strikers do exactly what Derbyshire did with the referee not giving the goal. Fair play it might not have been, but it is standard practice these days, whether you like it or not.

[12-13 on penalties was a deserved result for them, but I wouldn’t, despite what the commentator said, call it ‘just desserts’.]