White Nights with Menhirs and Dolmens 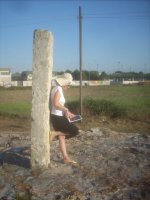 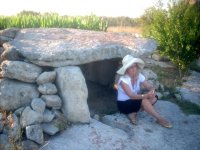 It is in Puglia, southern Italy. Could be in Texas, same vegetation, could be in Mexico, similar food, could be Stonehenge: menhirs  and dolmens are scattered among vineyards, next to  beer-bars in the middle of nowhere, to mark the center of the world, the beginning of a civilization. It's around Melpignano, a 2 200  inhabitant village where a White night Feast is held in July: music all night, words all about stars: with cosmonauts, science fiction writers, futurists, scientists.
An old man is sitting next to a menhir during the worst heat of the day after a thunderstorm, he tells us; the weather is not as it used to be. Nowadays we peasants hide in the dolmens for a siesta. A violent but short storm follows his prophetic words.
We enter a dolmen with our laptops and cell phones. I even get a free wifi signal that the leftist mayor gives to his people. Under the dolmen big stone, in the midst of a retrofitted  convent from 14 th century, in a greek restaurant, since orthodox people have been there before the catholics fighting the Turks. Fallen empires among erect menhirs. Fallen over their own mistakes: fundamentalist wars. Even the menhirs have inscriptions of different religions of various conquerors.
As we establish a Skype connection to a cosmonaut, we sit among  monoliths, with Saturn and Mars in conjunction in the misty sky. Internet is like a menhir. It is the center of the world and yet it is everywhere.