The ICTY: Justice in a box 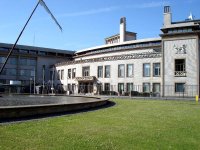 “As I was passing by, I saw that there were dead bodies, corpses, lying on the grass in front of the school bathroom… There may have been a dozen corpses,” said a small, female voice with a British accent over the loud speaker. The voice gave sound to the man’s face that appeared on the television screen overhead.

The broad shouldered owner of the muted face and the translated statement sat before me, his back to the pane of glass that separated him and the court room from me and a well-dressed young man one row over. Excepting the guard who stood by the door, the two of us were the only audience that day to the afternoon session of the most recent Srebrenica case underway at the ICTY (International Criminal Tribunal for the former Yugoslavia).

At the invitation of a friend of mine now living in The Hague, I went to the Netherlands to visit her and to watch the Tribunal.

During my visit I attended three separate cases. First I watched the Prlić trial, a case brought against Jadranko Prlić and five other Bosnian Croats charged with crimes against Muslims in the area around Mostar. There I listened to a Bosnian woman, once in charge of refugee issues within the Bosnian Embassy in Zagreb. Recalling her work between 1992 and 1994, she described the immense professional and personal challenges she faced while dealing with an incredible influx of refugees and a complete absence of information.

My second day I watched the Haradinaj trial in which Ramush Haradinaj and two other leaders of the KLA (Kosovo Liberation Army) are being tried for crimes committed against Kosovo Serbs and unsupportive Albanians. There I watched the questioning of an Albanian witness brought in to explain the technical workings of the Lake Radonjić canal. The witness described the water depth and speed, the number of gates and the seasonal changes. All this culminated in an investigator’s final question: If a dead body is dropped in the canal, is the current forceful enough to carry it away? The answer, more or less, was yes.

And lastly I attended the current Srebrenica trial, Popović et al., one of several cases against Bosnian Serbs accused of crimes related to what has now been ruled genocide. It was during this trial that I listened as the broad shouldered witness from Ročevići, a once professional soldier turned caterer, recalled the bodies strewn about in front of an elementary school bathroom, the screams of sweltering prisoners trapped inside the school gym and the threats of the drunken soldiers who had brought them there.

As I sat in the chilled, stale air of the over-climatized courtroom, in this quaint Dutch city far from the village of Ročevići or Lake Radonjić, I found myself more keenly aware of the region’s recent atrocities than I had been at any point living in Belgrade, the capital of a country whose current political and social climate have been largely facilitated by the very crimes on trial.

Little about my first impressions of the Tribunal suggested that its proceedings could evoke such an awareness of human atrocity, let alone atrocities committed in villages far away in Eastern Bosnia or remote regions of Kosovo.

Like any court, the ICTY hinges on order and process. Every document is numbered and filed accordingly, every word transcribed, and every testimony clarified, bring the proceedings to a staggeringly slow speed and stripping testimony of much of its emotion.

As witnesses recount their stories, the judges leave no room for poetics. When one witness in the Popović trial described a woman in his town as being “hit and wounded” while out washing her dishes in the front yard, the judge interrupted an asked, “ hit and wounded by what? What hit her?”

“A sort of infantry weapon,” the witness answered.

“And you mean that she was physically hit with a weapon or hit with a bullet from an infantry weapon?”

“A bullet, yes,” he replied, clearly flustered by the interruption.

Yet for all the court’s attention to word choice, the pronunciation of Serbian, Bosnian, Croatian or Albanian words is regularly disregarded. While judges will stop testimony for clarifications like “hit” versus “hit by a bullet,” they pass right over the manglings of names of people and places that crookedly roll off the lawyers’ tongues. Granted, some degree of mispronunciation is inherent to the international nature of the court, but such repeated garbling looks disrespectful and ignorant.

The establishment of fact “beyond a reasonable doubt” is a primarily goal for the ICTY. The general public of the former Yugoslavia seems to take this goal with a hefty dose of skepticism. After all, “How can a team of foreigners make sense of events locals themselves cannot explain?” the thinking goes. This perceived gulf between international investigators and local communities only widens at the sight of Tribunal officials who are far better phrased in incomprehensible legal jargon than in the names of the people and places they are investigating.

This acceptance of local names as too complicated to pronounce also harkens back to Western perception of the Balkans as a region too complicated for the “civilized world” to comprehend. It was this very perception that, not so long ago, allowed the widespread acceptance of the “ancient ethnic hatreds” theory as an excuse for international inaction in the face of the very crimes now being tried.

Just as the nature and scale of the crimes in question do not seem to have changed the fundamental workings of the court, neither do they seem to have changed the fundamental behavior of the lawyers involved. Despite the fact that day in and day out these lawyers investigate and analyze crimes that claimed hundreds an in some cases thousands of lives, they still seem unable to avoid petty jibes at their opposing “learned friends.”

Annoyed by an objection from the opposing side, one lawyer in the Prlić trial turned to the witness and explained the objection as “just a game they play.” In the same case, another lawyer, prefacing a statement to be read aloud, addressed the prosecution and mockingly said, “It may be inconvenient for the prosecution to hear facts in this case, but…” and proceeded to read the paper before him.

Yet for all its faults, the Tribunal is powerful to watch; and its poignancy, at least in part, stems from some of the same attributes that leave its process so lifeless and sterile. Without poetic flourishes and presentation the voices of witnesses stand strongly on their own, more so than in any book, documentary or commemorative ceremony. And though the lawyers may fail to master their đ’s and ž’s or to hold back their arrogance, the operation as a whole - more than 1,100 strong and now backed by over $270,000,000 annually - shows that the international community is listening.

But I had to go all the way to The Hague myself to recognize the Tribunal for its value. And valuable or not, the court is entirely irrelevant for the countries most greatly involved if its effects cannot be appreciated beyond its walls and the theoretical world of international justice.

But what should be changed to put the work of the Tribunal within public reach? That the court is physically far removed from the former Yugoslavia certainly does bring an inherent level of inaccessibility, but an internal location is simply not an option. At times the court proceedings have been broadcasted on television, but never with the range of coverage needed to convey the breadth of the court's work.

That the Tribunal is more frequently discussed as an obstacle to EU accession than as a body of justice working towards future peace and stability is far more problematic than the institution’s locale. The story of Serbia and the Tribunal has become “Us versus Them,” and Serbian politicians playing the victim card are not the only ones to blame. The use of the EU as a dangling carrot to push for the arrest of accused war criminals is unavoidable. After all, even with such stipulation the arrest of inditees has been a long, slow process. But Carla Del Ponte’s endless emphasis on arrests over all other aspects of the Tribunal distracts from a public understanding of the court’s value as a source of justice and a more stable future.

But perhaps it is unrealistic to expect this generation, for whom the subject matter is still an open wound, to gain much from the Tribunal’s work. No amount of questioning, investigation and documentation can change damage done to individual lives. But perhaps generations from now, when the wound is healed but still easily reopened, all the Tribunal’s documentation and endless pages of court testimony will help to make the fire of nationalism, heated by exaggerated tales of historic victim-hood, a harder flame to fuel.