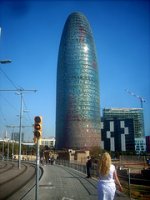 Lou Reed and Laurie Anderson performed a poetry session in Kosmopolis Barcelona. She was big on the screen from somewhere in US, while he was small and live in front of us, on the black and red stage, with a bunch of loose sheets of paper from which he was reading verses.

It was a weird session from this recently married couple, who have always had a huge audience all over the world. They were not singing but speaking of Catalonia, to the Catalans, using the words of Catalonian poets. Transgressive, brave, underground. angry verses of poor, gay, wronged, talented, wild personas -- translated into English. The verses rang around the packed crowd as an electric wave on the spine.

The sleepy spoiled bourgeoisie of the new mainstream, who came to see a celebrity punk dancing and singing, were shaken to their bones. Some applauded, some left, but the emotive response was visible.

in his press conference Lou Reed said he was fed up with being asked about his darkness, about his bad boy attitudes. The Velvet Underground rockstar was fed up with the press, but the press is not dismissing him or his new book, just published in Spain.

Barcelona is the center of Spanish publishing, it is multicultural and leftist, and yet it is also separatist and nationalist, as proud and touch as right-winged poor illiterate cities . The Catalans claim their own language, their own culture and they want to split away from the rest of the Spain.

Kosmopolis is a Barcelona festival of literature, new media and politics: it invites prominent artists, writers and political activists from all over the world. The city is proud of their culture and of their literary guests. The streets outside the venue are full of tourists, street artists, Catholic beggars, pick pockets , transvestites, émigrés, music bands, cafes, young desperadoes and old jet setters. Lou and Laurie performed their "Made in Catalonia" show as gypsy jet setters -- a crowd who make Catalonia a nationalist region with cosmopolitan principles. The new nationalism smells of cosmopolitan elitism -- splendid separatist islands, eluding a world in decay. If you don't want to be with them, you will have to do without them.