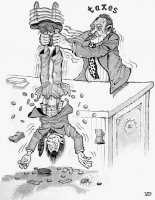 Let me see if I have this straight:

16. People will not be able to pay taxes
17. Government will charge them fines
18. Government will add imaginary fines and unpaid taxes to their imaginary income (see above) and          tell the IMF and the EU how much they have SAVED!!!

"And they all lived happily ever after."