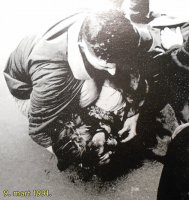 We approach the 2055th anniversary of the death of Gaius Julius Caesar at the hands of his friend Brutus. What has changed in the meantime?

Today, Mr. Caesar would be surrounded by a coterie of armed guards in dark glasses. He would probably not be walking around the forum unprotected and in a bed-sheet all by himself. He might not even talk to Messrs. Brutus, Casca, and Tillius directly, but rather have his people set up discussions (especially as the pretext was a petition which Tillius Cimber wanted to conference about on his exiled brother).