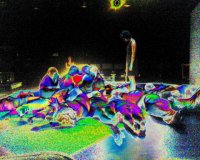 *THE NECROMANCERS *
by Jasmina Tesanovic

The Language of War Crime

Does genocide have a global language all its own? An international, transnational sound, of lies deployed as weapons in the silence of the dead, as a choir of invisible yet omnipresent ghosts of civilians, the missing, the buried...

"In 1995, during the war in Bosnia, about 8,000 Muslim men and boys were rounded up and killed after Bosnian Serb forces captured Srebrenica, a UN-protected enclave. Ten years later Serbian media for the first time presented the public with a graphic and direct evidence of the massacre. The video, screened on TV stations across the country, showed six Bosnian men being executed by soldiers wearing uniforms of special forces under command of the Serbian police, the so-called Scorpions. Five killers were recognized from the video and put on trial as the first suspects to be tried over the massacre by a Serbian war crime court. It was also the biggest war crimes trial of Serbs by Serbs to date.

"Over 14 months relatives of the Bosnian victims attended the trial, and watched from behind bullet-proof glass. Relatives of the defendants were also in the front row. Playwright Jasmina Tesanovic, witnessed the trial as a peace activist and was our eyes and ears in the courtroom.

"In Jerusalem, after World War II, Hannah Arendt, the most influential 20th century political philosopher, followed the trial of Adolf Eichmann, the engineer of Holocaust. It was her presence in the courthouse that made her understand and describe the banality of evil. Now we know that the great evils in history are not executed by fanatics or sociopaths, but rather by ordinary people who accepted the premises of their state and participated convinced that their actions were normal."

Let me try to explain how it feels to see a play of my own, written in the language of war crimes and in my mother language, Serbian, performed here in San Francisco, in the English language, by Americans.

Ten years from now, who knows how history will judge our present muddled actions – be it by Serbians or by Americans – and judge our own responsibility for the hidden crimes committed in our name.

The young Californian actors are perfectly in tune with the costumes and the words of Bosnian, Serbs...of the Dutch NATO troops who looked the other way... of the victims, of the mothers of the dead, of global journalists, of the perpetrators and the prey... It is precisely as if those distant war crimes of the 1990s happened and are happening today, in their own language, in their name, with their votes, with their money.

From the war of Vietnam to the war in Iraq, the military rhetoric of power and domination, the patriarchal values of a homeland security rampaging far away from home: in English they have come to sound as familiar as they still sound in Serbian. The mass graves of Bosnia are massed just like those in Kosovo, or in Rwanda, Sudan, Chechnya, Algeria, Afghanistan, Pakistan, Burma... name it!

The silenced global voices of the opposition to the world's blaring military hysteria... that division line is no longer ethnic, political, or national, it is between the few powerful and the silenced masses of the dis-empowered.

Some years ago, I wrote a "Letter to My Imaginary American Friend," asking her/him to say "stop" to the war so clearly coming. To speak out, in her/his name, for the sake of the long and important American democratic culture, a history of rights and freedom which the whole world once admired. I did not imagine that my play about a Serbian paramilitary group would mirror everyday reality in the USA: the daily toll of the bells of death, the endless racket of weapons, the theatrical language of
the Globalization of Balkanization.

The last show of the Necromancers. Cast members channeling directly to Jasmina’s blog.

We are trying to extend the energy and love we found for each other in this show through the night. At least.

Here they come – thoughts in random order from a random bunch: