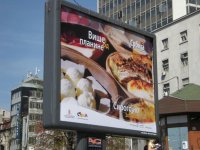 There is abundant evidence to support the hypothesis that I am writing to you now from Serbia. Although I do not feel under any obligation to prove to you where I am, I certainly do not feel the need for someone to tell ME where I am.

And then along comes the Tourist Organization of Serbia.

All around Belgrade this summer, billboards and posters have sprung up. They have pictures of enticing foods, they have catchy slogans luring the idle passer by to dream about voyages to exotic places. When you look closer, you see that (Hey!) it is the food you had for lunch, and (Wait!) this is advertising for Serbia!

Hang on... aren't we already here?

Indeed we are, we in Belgrade respond. Why then, we ask ourselves, has the TOS decided to spend a lot of money for an advertising campaign promoting Serbia to Serbs and the rest of us here? This is where we began: I am sure I do not need them to tell me where I am.

When we travel to a foreign country (let's say Burkina Faso for example), we usually do so by a conscious act of free will. Therefore when we land in Ouagadougou, we do not need to be convinced to come to Burkina Faso. We have already bought that concept. Maybe a nice poster showing us the Park of Bangr Weogo or the sacred crocodiles of Sabou would be better...

A campaign for Serbia would be good, say, in another country where potential holiday-makers are at sixes and sevens about where to holiday-make. They might see a poster of delicious kajmak and sarma and say, "Ok honey, let's go to Serbia." However, the posters are written in Cyrillic characters, and the local holiday-maker from, say, Sheffield would have a hard time making it out. She might say, "Ok honey, let's go to Russia."

I begin to wonder about the target audience of this campaign. It is not foreign tourists, as anyone seeing them has already chosen to come here. It is not Western European tourists, because we cannot read the symbols. Who is it for anyway?

One (plausible) possibility is that it is aimed at all of us, encouraging us to stay home for the holidays. Another (much less plausible but more fun) possibility is that it is for accidental tourists who boarded a train in Istanbul thinking they were headed for Plovdiv but overslept and ended up in Belgrade. In this case, they might spring out of the compartment, stretch their legs and see these posters. "Serbia," they would say. "That sounds good! Let's go there!"

"But you are already here," the conductor would say.

Admittedly, this scenario does not seem entirely likely, but stranger things can happen. After all, there has to be a reason for creating such a lovely campaign for Serbia (and it is very nicely done) and placing it right here at home.

Can anyone help me understand this?