What we need in Belgrade, really, is a suspension bridge.

After the early reports of the damage to the pylons holding Gazela above the water's surface, I immediately had a picture in my mind of cars and trucks driving merrily into a gaping hole and over the edge to pile up in the Sava. Lemming-like, on the second day after the announcement, I was driving to New Belgrade behind a huge line of cars to cross this bridge. Given the option of driving through town, adding an extra hour at least to the crossing, and risking it all to use the bridge, I chose the latter. I consulted my passengers and they sided with me. We chose the danger.

The news of the damaged pylons made me think of the dramatic bridge collapse in Minneapolis, Minnesota two years ago which claimed the lives of 13 and injured many more. In the meantime, Belgrade city authorities keep telling us it is safe to use and will be fixed in 15 days. They neglected to tell us when the 15 days would start...

For years there have been calls for more bridges and plans to renovate the Gazela bridge. It was supposed to start two years ago, then last year, then this summer, and now - given the pressing need - sometime adjacent to now. The works have been delayed and delayed. The last mayoral race in Belgrade was run partially on the amount of time it would take to build a new bridge in Ada (2 years? 3 years? 4 years?).

With the new traffic law in place, forcing motorists to attach bluetooth devices to their ears that look like Borg implants, the next step was only logical. The strategy has been to wait until it breaks down or until Star Trek transporter technology could be made available and eliminate the need for cars and bridges altogether.  Apparently, due to some mix up in customs with the Heisenberg subspace field compensator, the cracks came first.

The suspension of reality bridges are already here. We will proceed Monday morning to this and that side of the Sava without major interruption. We will continue to curse the bridges and traffic. We will continue to dream of easily flowing traffic from New to old Belgrade. We will suspend our disbelief that it will ever be done in our lifetimes. And we will suspend the belief that it will be our car which will be the last to cross the Gazela bridge before it crumbles.

You have the bridge, Scotty. Stand by to transport. 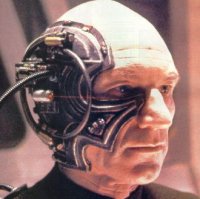