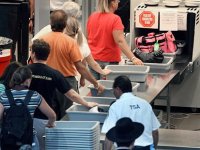 There was a time (he said, adopting an avuncular, if not grandfatherly, tone) when travelling by airplane was something of a prestigious or luxurious experience. The little tiny soaps in the bathroom were novelties. The bathrooms, while we are the subject, were kept clean. The stewardesses were lovely and smiling and charming. And the whole experience was rather pleasant...

The airlines would alert passengers of delays, sometimes even phoning them at home. The booking of the flight took place in an atmosphere akin to booking a resort holiday in the Maldives. The passenger, in short, was made to feel respected, important, and in charge of the situation. However...

The following is an actual conversation, recorded to the best of my memory, which I heard this weekend at the airport:

When is the flight to London?

They will make an announcement later.

The gate used to be A1 and now it says nothing. Did it change?

Is the flight delayed?

They will make an announcement.

What time will it leave?

No phone was lifted nor computer consulted for the "information" attendant to impart strictly no information to the worried passenger. I winced as I listened because I was about to go ask the same set of questions. And get the same set of non-answers.

The plane today is a lot like a bus, except that it defies gravitational laws. We never know when the bus is coming. Half the time we do not know where the bus will take us. People jostle and push and shove their way onto the bus while the driver waits, bored, to close the doors.

Another point of difference is that, on the bus, we do not suspect the passengers of trying to hide explosive devices in their belts. While it is true that no one wants to be on a plane which might be bombed, it is also true that taking off all of our clothes at the security check point is a little more than humiliating for everyone - and I have doubts as to how many terrorists it stops.

All the metal out of the pockets. Then your jacket. Then your watch. Then your belt (never mind if your pants fall down). Then your shoes. And then you still beep because somewhere on your person is something suspicious (never blame the machine, please). Therefore: hands up and submit to a search. If all this is not enough, once they have cleared you (or arrested and executed you), the next passenger is crowding in behind for his or her full body-cavity search while you are still trying to get redressed and reassembled.

After this experience, we wander through the departure hall reading sign and listening to announcements telling us that our flight has been mysteriously delayed or re-routed through Ouagadougou.

My advice - take deep breaths and a seat. Asking at the information desk may cause you to be nostalgic for the bus.