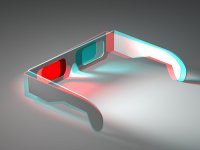 Strolling through the walkways of one of our illustrious shopping malls last night, I was bludgeoned on the head.

The instrument used to whack me was a nicely crafted bit of Consumer Nonsense such as often seems to happen to me. The attack was unprovoked (or not very much so) and left me in a bit of a daze for hours after. Let me explain....

I was with friends who were shopping. This means that my role was to follow along and present the aspect of someone who was interested in the surrounding wares so as not to give the impression that was just idly following a shopper. It sounds much more complicated than it actually is. In an electronics emporium, I saw something that actually did catch my attention.

A television at which I could not look.

It was a new 3D television, made by a group of clever Japanese or Korean scientists in their secret laboratory. To look at it in its display, the average consumer gets a headache. The displacement of the red-green and red-blue spectrum (anaglyph images) kept making me want to look away from it. But the rest of the display was quite attractive, including the price which seemed very low for a TV which can produce a headache at will (usually it takes a good deal of channel surfing to develop one).

So, of course, I asked the salesman if I could look at it with the special 3D glasses. After all, if I am going to invest in this technology, I should need to inspect it and see if the effect is as compelling as it promises. There was a requisite sofa at the ready for such viewings, placed at about a two meters twenty from the screen. I extended my hand in anticipation of receiving the glasses and completing the experience.

After a short moment, I wondered aloud how he expected anyone to buy this TV and why it was set up for a test viewing if the glasses could not be used. "We don't have any," said he. So, again wondering aloud, if I were to decide to buy this, it would be because I IMAGINE that I could have 3D TV at home. I would have to IMAGINE that I liked it better than the regular 2D to which I have been accustomed over my entire lifetime and give it all up on the POSSIBILITY that I would like this better?

No batteries? In the glasses you do not have? This was the moment when my head began to spin and the full brunt of the Consumer Nonsense came cracking down over my skull. I looked back at the TV and found that the blues and reds seemed to have separated even further. Someone had sat down on the viewing sofa and was watching, without glasses. I looked at him closely to see if he did not have 3D ocular implants or contact lenses.

The salesman, trained professional that he was, looked at me in silence. His mouth seemed to be slightly open. His eyes were challenging. They could have been saying one of two things: A) I cannot be bothered to go to the back and get the glasses for you because you are not really going to buy this tonight; or B) I don't know what the glasses look like - I used to sell shoes. I asked him how many of these 3D TVs he had sold.

None. This is just a display.

WARNING: In order to avoid this experience, we strongly suggest that you form a negative opinion of 3D television before shopping. This will abnegate the dilatory effects of circular logic and will be much easier on the salesman.