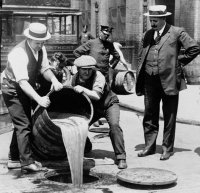 There is nothing more sobering than being pulled over for walking under the influence.

According to the brain scientists and rocket surgeons whom we have elected to public office in Belgrade ("we" being loosely applied here), it is NOT enough to switch off the music early. It is NOT enough to close the bars, cafes, and restaurants by midnight. It is NOT enough to curtail the sale of alcohol after a certain hour. Now, if we have a few too many, we will have to sleep in the bars until morning.

Drunk driving is a serious business and should well be down-upon cracked. But the next stumbling steps seem a bit draconian. The intoxicated are banned from public transport. And the drunken staggers which mark many a weekend evening in the White City are now against the law and punishable by fines of up to EUR 300.

In practical terms: if you have had too much and have the presence of mind to leave your car behind, you could still be nicked for drunk and disorderly as you walk home.

The implications, however, are more staggering still. The implied intent is to get people to drink less. A good thing? Certainly. Another implied result is to force people who DO choose to inebriate themselves to take taxis, all other options being closed to them. Collusion and conspiracy? Possibly. A further implication is in the bulging coffers of the city drunk tank (do we have one?) when the police sweep up a few hundred tipsy citizens winding their way back from an evening on the town. Money spinner? For sure!

Looking at it from the other side, one can see the benefit to the Regular Guy of not having to suffer drunks sitting next to them on the bus. One could also see the advantage of keeping people off the streets who use them as crawl spaces, urinals, vomitoriums, and dance halls owing to the influence of strong drink. Surely that kind of behavior is to be frowned upon.

There is a little civil liberties issue lurking in the back of my head, however. The basic idea is how much the citizen should be responsible for his own actions and how much should be within the purview of the constabulary. We humans regularly choose boneheaded courses of action. We are distinguished from lower animals by that very ability to act stupidly. Does that mean we should embrace our idiot natures and exercise our boneheadedness to the full? No - that is not the question here. The question is this: Are we able, as a species and as citizens within a social structure, to be self-regulating?

And if the laws regulating that social structure appear to be arbitrary, inconsistently applied, or haphazard, how much can the citizen be blamed for being unable to walk the straight line? Big questions, to be sure.

All of this would seem to be a defense of drunkenness. It is not. It is rather a call for a little common sense. Common sense holds that everyone, no matter how unevolved, knows that alcohol impairs the common senses. We also know that smoking is bad for us. We know we should not walk out into the middle of a busy street. We know a lot of things. Making them illegal, however, lifts the responsibility from our shoulders and places it in the hands of the police.

The Solution, therefore, is to finish the job. Let's make the sale and consumption of alcohol illegal. Let's ban cigarettes. Let's furthermore restrict citizens from going from place to place without a specific reason. Let's prevent them from eating too much. Let's ban music. After all, it would seem that we cannot be trusted to eat, drink, move about, or converse without running afoul of the law anyway. With all of us under a kind of general house arrest, the citizen could be sure to be safe and peaceful.

What a beautiful world this would be!