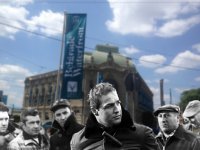 With great pomp and circumstance, Sheik Ali has announced that a "project" has been signed for "billions" of euros. We do not need to know what was signed. We just need to believe.

The premise of the project is a brilliant piece of meta-fictional leger-de-main in which the Belgrade cityscape will be transformed into a Gulf oasis of glass and steel, an entire historic quarter of Belgrade will be demolished, untold billions will be invested in an undisclosed way, and the architects of the grand design will be either dead or doddering by the time the curtain rises. Local citizens rise up against it in 2015, showing outrage and indignant anger and effigies of ducks, but their cries slowly die out over the 360 months of project preparation.

In the meantime, Sheik Ali will reign for several years and retire to Abu Dhabi, pockets lined in an undisclosed manner.

The whole project is a real-time depiction of collective insanity. The producer announces a project with only enough details to make everyone angry. The people actually accept this project as the truth - i.e., that it will really happen - and wax eloquent in their anger about it. A lot of money greases its way over wires and numbered accounts, and the angry mobs will have forgotten about the whole thing by the time the first building crane rises over Sava Mala.

Read the full blog on The Standard Deviation