The portrait, obviously displaced from a nearby church wall, was leading a pack of citizens walking solemnly down the street. Another of the faithful was carrying the cross for him, and the procession seemed to be one of the many such paschal events that take place around the world at this time of year.

The pack that followed, however, had different colors showing. Bright red banners. It looked from a distance to be a political party standard, but closer inspection - as they slowly progressed past my position - showed that this was in fact a an anti-abortion parade, disguised as a religious procession, with Jesus at the helm.

While I am well aware that both the church and abortion are conversational hot-potatoes about which people have extremely divisive opinions, what bothered me in this whole thing was not the topic, but the brand bundling.

Imagine, if you will, trudging up the hill to Golgotha, Jesus with a cross on his back and a banner waving behind him saying "Eat at Elijah's". We may accept that perhaps the Messiah really liked to dig into Elijah's famous Jerusalem falafels, but would he (He?) actually like to mix his messages so egregiously?

Probably not, say the thronging onlookers. 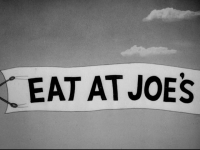 Here we have a collection of well-meaning Orthodox Christian folk, fairly likely to be unemployed as they were parading of a Tuesday morning and only improbably being given the day off for marching purposes, dual-messaging the rest of Belgrade. Is it an Easter parade? Is it an anti-abortion protest? Is it political? Is it religious?

Can it be both?

A lot of imponderable questions spring to mind. The apologists would very likely claim that the church takes a position against abortion and therefore it is natural that the two questions get rolled into one. They might argue that it is a religious topic with inevitable political ramifications. Others might say that it is really a political message, cloaked in the shroud of the Savior (whose holiday it is after all) and using him (Him?) as a brand spokesman.

Not to take a position on either of the hot-potatoes presented in this juxtaposition (as I am painfully aware that even mentioning the subjects will subject me to the severest vilification), this parade which I just witnessed strikes me as fundamentally flawed. I understand the drive to show your faith during the high holidays. I also understand that people want to express their feelings about abortion. By mashing them together, however, I think neither camp is getting their full share of attention.

And if I were Jesus, I would be a little miffed about the whole thing.