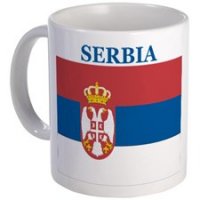 What are the vital elements of a country's brand?

The branding of Serbia has been going through a very long series of false starts and misfires for as long as I have known about it. I was involved in an early post-transition project in 2004 and 2005, but the branding initiative was ultimately shelved because no one could address the elephant in the conference room:

What is Serbia's brand?

There are many schools of thought and many able practitioners of "nation branding" available for people seeking to answer this question. One group thinks that national products should take the fore, associating a country with what it produces. The examples of this kind of branding are many. Italy for example could be linked with pasta, coffee, design, fashion, or ice cream. But does this capture the essence?

Another group thinks that geographical places make the brand. If we equate Greece with the Parthenon and the islands (and many other places) then the aggregate whole is the country's branding. This has the advantage of leaching onto the Familiar to derive a meaning. And it works for the products as well.

Country-branding does always seem to have a tourist bent. This is for the simple reason that boosting tourism is probably the biggest and most compelling reason to brand a country. But some countries want to be branded for investment. Some want to advance political agendas. Some just want to be known.

Serbia needs all of these.

A further branding bunch would like to tag a country with an attitude or a character. The US has made hay of this as the "land of the free" and promoter of the "American Dream". The US, in this way, is not a brand but AMERICA is a big one. As the US does not have a deep cultural heritage on which to lean, it banks on its idealism. You could make it into the country of the Big Mac and Coke (and many have), but this feels shallow to a lot of us.