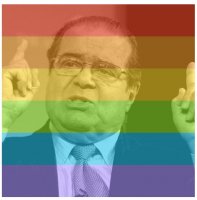 Is it possible to have an opinion with joining a Cause?

Case Study: Same-sex Marriage. It is not acceptable anymore to merely accept this and generally agree with it. The Socially Acceptable Model is to "celebrate" it. We must loudly proclaim our most underscored, emphatic, and rainbow-painted glee. We must show Vindication and Exaltation. Otherwise, we might be mistaken for a Scalia-style dissenter.

And God forbid we actually do dissent...

In the past few days since the Supreme Court voted overwhelmingly (5-4) to constitutionalize same-sex marriage, our Facebook walls have gone polychrome. Everyone is a part of this celebration. Everyone apparently Felt Strongly about the issue and was notorious in support of same-sex marriage.

Everyone, that is, except most people. Most people were pretty quiet about it. Most people watched state after state ratify same-sex marriage. Most people saw certain states (i.e., Texas et al.) banning such marriages and clucked their tongues in the privacy of their own homes.

Equal rights, in all forms, are something to be pleased about. I am pleased about the Supreme Court decision in Obergefell v. Hodges. I am also pleased about sunny weather, but I do not raise a flag to celebrate it. Perhaps I should.

My real opinion? I think the states should have all ratified independently and that the Supreme Court should not have had to weigh in on a state issue. I think that it should have been a non-issue. But now that it is the Law of the Land, it seems to be settled. Can we move on to the next Big Issue? Can it concern us that 45 million Americans live below the poverty line?

I defend civil rights and believe in upholding them. I believe it is something that is very important. But I also believe that people should not get extra social credit for jumping on the bandwagon.

America is very well known for its bandwagonism. We get behind causes - like illegal preemptive wars - and are compelled to march and sing and change our Facebook photos. If not, we are considered "less than" somehow. The position of being Generally Pleased is no longer enough. We must actively demonstrate.

Want to celebrate more blogs by Chris Farmer? Check out The Standard Deviation