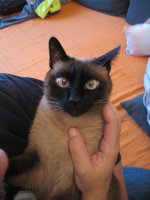 As far as I can tell, my humans have completely lost their minds.
[NOTE: This message was found written in shaky handwriting on a piece of wrapping paper behind the sofa. It has been determined that it constitutes part of a longer report by Agent 836 (code named “Lav”, the cat) on human behavior, presumably to be submitted to an unknown supervisory cat. We have reproduced the text here as faithfully as possible, although some translation errors can certainly be found. Cat is an inflected language wherein the word “meow” is often repeated.]
Once again this year they have started to celebrate what they call Christmas – the word comes up quite often in casual conversation so one must assume it has a particular meaning for their species.
As a cat, and a particularly good cat I might add, I spend most of my days looking out the windows at pigeons and trees, frustrated not to be able to climb the latter or eat the former.
Yesterday, I was surprised to find that the humans had decided to place a plastic tree inside the house. At the top of this artifice, there is a red sparkling bird that never moves – possibly plastic too but I am not sure. And scattered over this tree, multicolored balls and hanging ornaments are dispersed near the outside branches.
All of this has been clearly designed for my betterment, for healthy exercise and play.
Another notable sign of their infirmity is the appearance throughout the apartment of numerous bags and boxes – again the intent of placing these items is usually for me to attack and climb.
You can imagine my shock when, as I approached the tree, the humans started making a series of loud and menacing noises. It sounded like “something, something, something, LAV, something, something, NO!”
After much study, I have determined that “NO!” is another derivative of their name for me.
Read the rest on
The Standard Deviation