Coffee and Art of Hidden Luxury 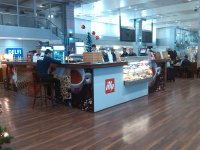 As usual, it all started at the airport.

Many of you who have experienced the Great Airports of the World - Heathrow, JFK, Dubai, and Belgrade's own Nikola Tesla - will know already what I am talking about. This is a subject, in fact, which is so well known to frequent fliers as to be superfluous to set to pixels. It is a level of luxury which we have come to expect, but it is not for the uninitiated...

This having been said, however, I would like to share this exquisite secret. Please, before we begin, I must ask you NOT to share this with anyone. Need to know basis. Ok?

(Pause while waiting for your assent. 15 minutes.)

As usual, it all started at the airport. I had a little extra time while waiting to pick up my sons at Nikola Tesla and decided to have a walkabout. I chanced upon the Dufry-run café in the departures area before passport control.

Coffee, I said to myself?

To the casual airport-walker-arounder, this appeared to be a Perfectly Ordinary Café. On first inspection, one could see that 97.5% of the tables has not been cleaned for several hours (or days). One could browse the selection of sandwich (1) in the display window next to the drinkable fruit yogurt. The uneducated would think it looked like a poorly (and oddly) stocked aisle at a Delhaize supermarket.

But they would be mistaken, of course.

Read more on The Standard Deviation