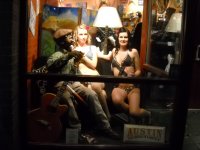 You don't have to Keep Austin Weird. Austin will stay so anyway.

Keep yourself straight if you manage to visit Austin, if you want to say something about weirdness. Or just tie your dirty red bandanna on the first day of SXSW, and move right along.

Thirteen thousand people, only five percent of them over fifty: this is the statistic of SXSW Interactive 2010. The panel I attended on "Why Do We Still Blog" was made of excuses, very plausible and honest: blogging is dead, long live Twitter. Still, every day, many new blogs are born.

Blogs have a natural life cycles and are made out of passion. They are the real world beating the reality world. Blog as a home, blog as a career, blog as business, blog as celebrity place, blogging for losers, blogs for personal issues, blogs for joy... Anyway, I heard every excuse for blogging... All possibilities except about hate comments, trolls, and destructive sabotage that haunt some Serbian blogs: this is America, not Serbia.

Once again Twitter is the big winner at the event. Although I already saw Twitter explode in popularity years ago, here at SXSW, now Twitter has become a global mainstream phenomenon. The keynote of the Twitter founder Evan Williams was like a press conference of a politician: his every word was valued and weighed. Shall I call it boring, deluding -- or just precise and diplomatic? That guy is dealing with revolutions, said my American friend. His medium has overgrown his intentions.

In fact, a panel called "Twitter revolution" was organized with Iranian women who were explaining how Twitter worked in Iran during the famous or infamous elections. No revolution occurred, because Twitter and blogs are used by both sides: there is no such thing as good media, it's always about people and causes. Even though officials quote Twitter messages as proofs of reality, Twitter cannot be taken as a mirror of a world. Good for Twitter, moving right along.

I saw the biographical Bill Hicks movie: a hip Texan comedian who had a weird sense of humor and set of intelligent alternative values to present before his premature death. The best American comedian, some people call Hicks: his elderly Mom, who was in the audience, told us: I had two children and then I had Bill, if you know what I mean.

The panel on failure started with: I woke up this morning and I fucked up. How? Failure is a big topic, with many not-so-many brilliant moments. Too technical as opposed to the concept of failure meaning epiphany, getting around things: after all America was discovered by mistake as a consequence of a failure. This year's Share electronic arts festival in Torino will be dedicated to those errors mishaps and failures that made our world as it is.

More movies: queuing and making friends. Sitting in queues, eating drinking talking to weird Austinites. A young blonde tells me: my parents came here in the seventies and never left. I can understand , I was born here and i will never leave. Where do you come from?

I tell her: Serbia and Italy.

Uhu Italy is beautiful... and Serbia? is it Albania; like a place where people deal in drugs and wars?

- You cannot generalize, says another voice from behind. Did you see the Serbian horror movie here?

- Too late for the headlines for that kind of story, says the voice.

I saw the film Mr Nice. There people deal in drugs and get acquitted at the end. A great movie. The director was for the liberalization of all drugs. The actors too.

When you watch a movie in Texas it's like a rodeo; the audience screams whistles, applauds. The question and answer session at the end is like a party. The fans are knowledgeable and passionate -- sometimes more than the filmmakers.

During the screening of Elektra, the projector breaks: never mind, the director tells us the end of the movie personally. The Q-and-A session does the rest.

There are so many things going on simultaneously that I have a feeling I am missing more than I am getting: I feel frustrated.

The SXSW bands are playing relentlessly: in the streets, in the bars, in the music halls.
Musicians are so talented: they all are. And the audience is so talented and eager too. We just stream in the Sixth Street, trying to have it all, with a feeling that we are missing something. It's too easy to admire art in MOMA museum but it takes an artist to recognize  it here on the ground.

At a bar called Maggie Mae's, my 63 year old friend and I are asked for ID at the entrance.  Even though I am am a resident of Austin Texas, I  show my Serbian drivers license, and they let me in. My friend Marsha has no ID with her, and even if she had one, I think she would not have shown it on demand. She is a proud Austinite, a hippie and a sixty eighter.

The bar bouncers are tough, taking her refusal to cooperate as a challenge to their security. .

What is this fuss all about? I asked. Why are they demanding IDs from everybody, even those obviously old enough to drink?
Nobody knew: not even the police. You cannot sell alcohol if you don't check the ID, we were told. It wasn't true, but that was their policy.

Who is crazy here? I wondered.

You must be joking, said another woman over sixty when asked for her ID. They were not joking: when confronted, they threw us all out. Including Marsha's prominent husband, Jon Lebkowsky the organizer of the concert in the bar that evening, who stood by his rebellious woman. I got thrown out of the bar myself, this foreigner who followed her heart with the Hell's Grannies activist, who waved her arms like Joan of Arc as she was shoved into the street. That made my day. It was quite a day: Sandra Bullock was back in Austin, (I hope) after she won an Oscar and her husband betrayed her in the tabloids.

Can you tell the difference between internet and music and film geeks? my American friend asks me.

Maybe the internet geeks are the fattest, I say.
But this year they are the coolest, internet is celebrating its 25 birthday. There are some people here who were there at the very beginning, those who thought that Internet was important, against all odds, hahahahahaha.

It became BIG and changed our lives, politically personally generally. And Bruce Sterling asked us in his ritual keynote closing speech of SXSW: what were you doing while Rome was burning? You were NETWORKING.

Well the next generation is coming and they will not forgive you this: they will surely say, you should have done better, you left us in a chaos with a chaos, unforgivable...

A revolution that didn't come from above, that was not imposed that cannot be stopped. Is it a revolution at all? We are not only networking while Rome is burning, we networked in order to burn Rome, and to dig our own graves in some situations, such the doom that is striking publishing and printed media. This will not stop even if we personally stop. SXSW is growing bigger and younger every year. We are lucky not to be thrown out of a pub for drinking when over 50!